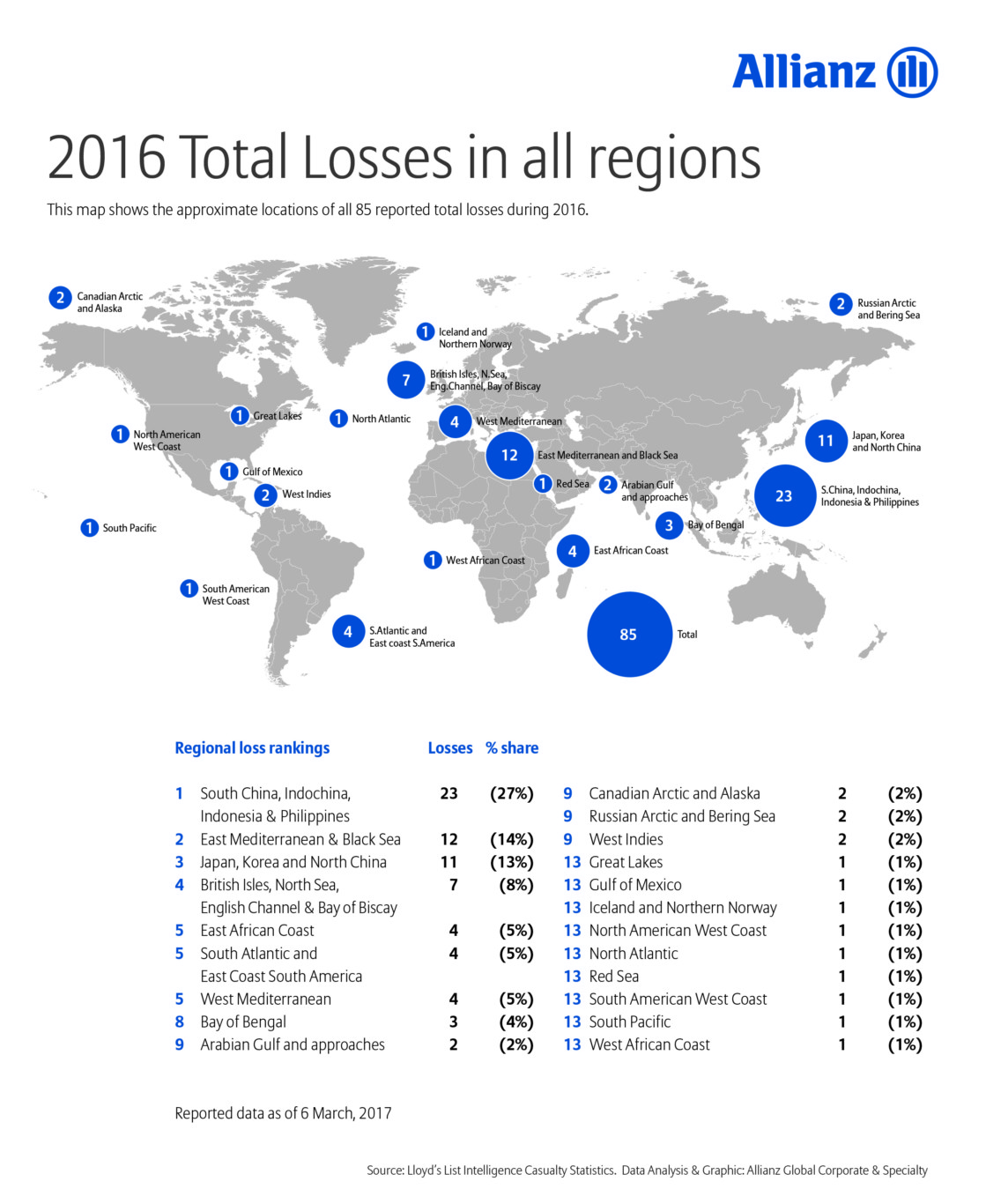 Large shipping losses have declined by 50% over the past decade, largely driven by development of a more robust safety environment by ship-owners, according to Allianz Global Corporate & Specialty SE’s (AGCS) fifth annual Safety & Shipping Review 2017.

There were 85 vessels reported as total losses around the shipping world in 2016, down 16% compared with a year earlier (101). Last year set safety records in the sector with the lowest number of losses in the past 10 years, preliminary figures show. The number of shipping incidents (casualties) also declined slightly year-on-year, by 4% with 2,611 reported, according to the review, which analyzes reported shipping losses over 100 gross tons.

“While the long-term downward loss trend is encouraging, there can be no room for complacency,” says Baptiste Ossena, Global Product Leader Hull & Marine Liabilities, AGCS. “The shipping sector is being buffeted by a number of interconnected risks at a time of inherent economic challenges.”
Environmental scrutiny is increasing with record fines for vessel pollution.  New ballast water management rules that come into force in 2017 are welcomed, but the cost of complying could have a significant impact on already-stressed shippers. Political risk is increasing, with activity in hotspots such as Yemen and the South China Sea having the potential to affect vessel routes. The threat of offshore cyber-attacks is also significant. “A ‘perfect storm’ of increasing regulatory pressure combined with narrowing margins and new risks is gathering,” says Ossena.

More than a quarter of shipping losses in 2016 (23) occurred in the South China, Indochina, Indonesia and Philippines region – the top hotspot for the last decade. Loss activity remained stable but was still almost double the East Mediterranean and Black Sea region (12), which was the next highest. Loss activity was up in the Japan, Korea and North China; East African Coast; South Atlantic and East Coast South America; and Canadian Arctic and Alaska maritime regions. 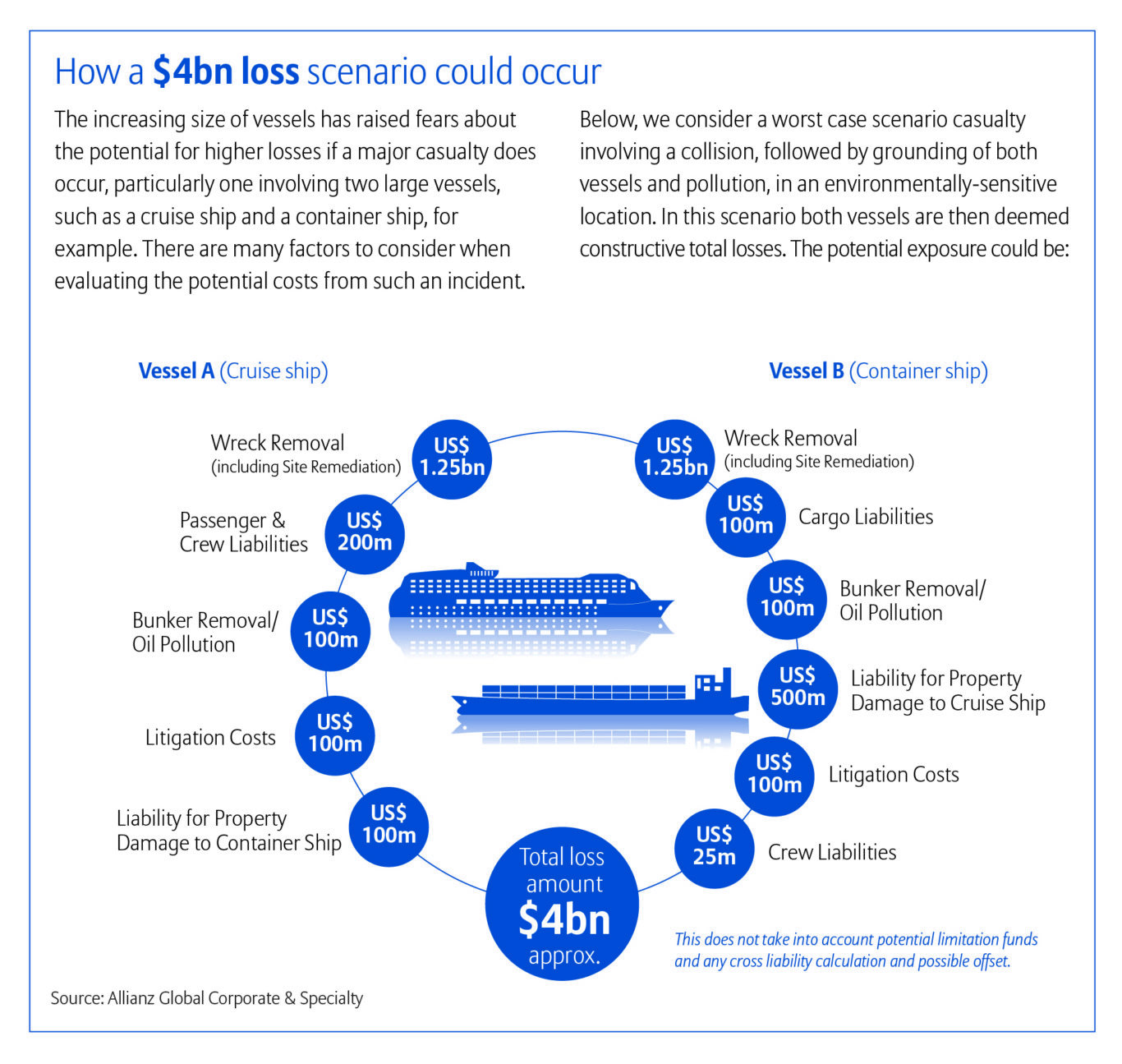 Cargo vessels (30) accounted for more than a third of all vessels lost. Passenger ferry losses increased slightly (8), driven by activity in the Mediterranean and South East Asia.  Standards remain an issue in some parts of Asia with bad weather, poor maintenance, weak enforcement of regulations and overcrowding contributing to loss activity.

The most common cause of global shipping losses remains foundering (sinking), accounting for over half of all losses in 2016, with bad weather often a factor. Meanwhile, over a third of shipping casualties during 2016 were caused by machinery damage. This was also responsible for driving a 16% uptick in incidents in the East Mediterranean & Black Sea region (563), enough to see it replace the British Isles as the top incident location over the past decade. Piracy incidents around the globe and shipping incidents in Arctic Circle waters declined year-on-year.

Piracy continues downward trend
In 2016, piracy continued its downward trend as it recorded only 191 incidents, down 22 from 2015 (246), which is the lowest total recorded since 1998. The reduction reflects the successful measures taken to contain the threat of Somali pirates in the Gulf of Aden and Indian Ocean, including the introduction of armed guards on-board vessels and the presence of a multinational naval task force. As a result there were just two recorded incidents off the coast of Somalia in 2016, compared with 160 in 2011. Despite this positive trend, the threat of Somali pirates has not gone away. In March 2017 pirates captured the oil tanker, Aris 13 off the coast of Somalia and demanded a ransom – the first such seizure of a large commercial vessel since 2012. Following this incident there has been four further attempts or successful incidents, raising concerns about piracy resurfacing more widely in the region. However, other risk challenges remain, such as the rise in crew kidnappings in parts of Asia and West Africa and the impact of an expected increase in Polar transits. 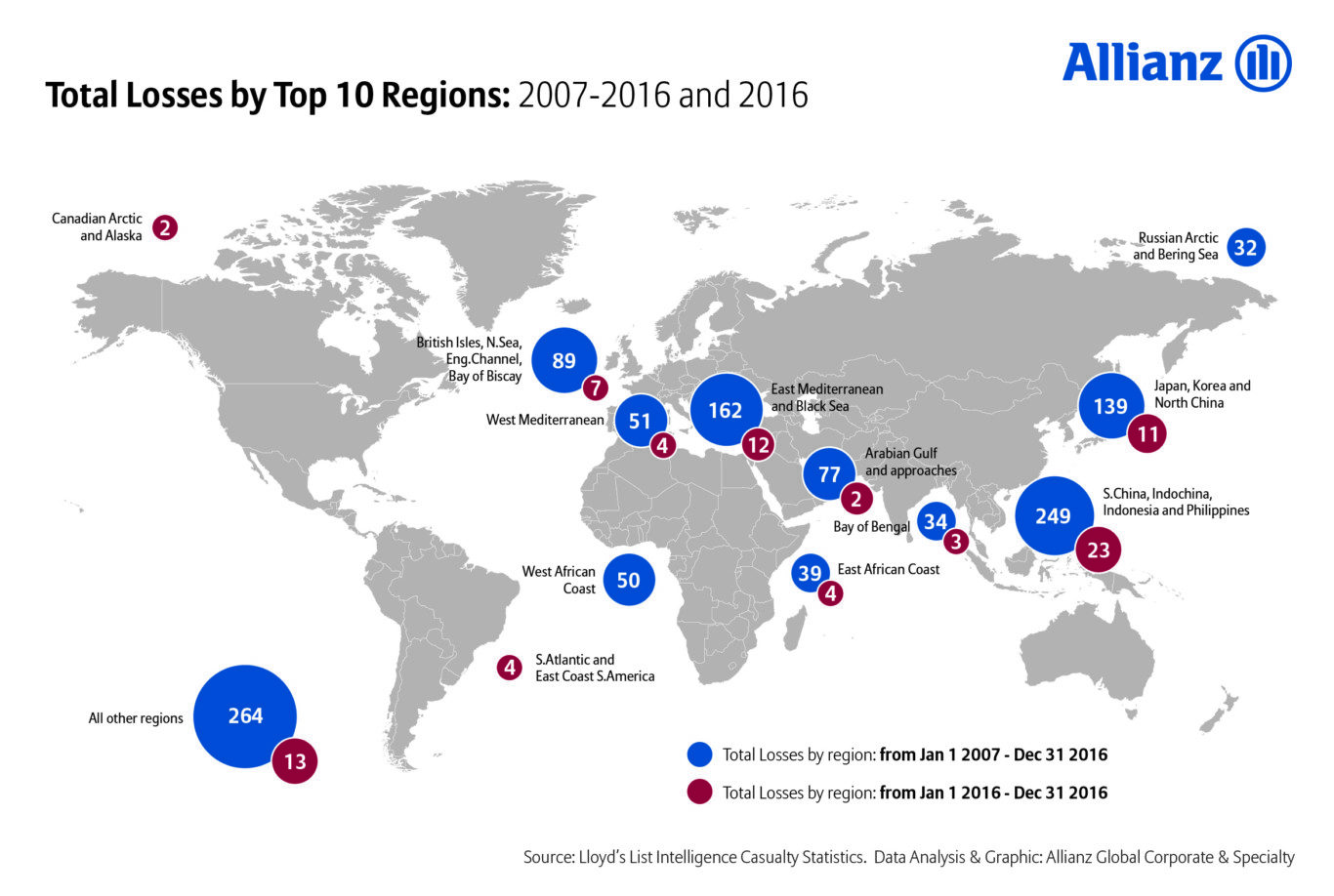 After Hanjin – economic pressures continue to bite
The collapse of one of the world’s largest shipping companies, Hanjin Shipping over the past year exposed the perilous state of some parts of the sector. Bankruptcies are rising and when debt levels are high and earnings are low, ship-owners often seek to make cost savings on maintenance budgets, training and crewing levels, all of which can spike loss activity.

“Crew negligence and inadequate vessel maintenance are two potential areas of increasing risk, particularly if ship-owners opt to recruit crew with less experience and training, or choose to stretch maintenance work to the longest possible intervals in order to save money,” says Duncan Southcott, Global Head of Marine Claims at AGCS. According to AGCS, negligence/poor maintenance is already one of the top causes of liability loss in the shipping sector and an increase in maintenance-related claims is observed. Implementing rigorous inspection and maintenance regimes is crucial.

Technology drives safety improvements but over-reliance presents risk challenges
Safety-enhancing technology is already impacting shipping – from electronic navigational tools through to shore-based monitoring of machinery and even crew welfare. Technology has the potential to significantly reduce both the impact of  human error – which AGCS analysis shows accounted for approximately 75% of the value of almost 15,000 marine liability insurance claims over five years; equivalent to over $1.6bn – and machinery breakdown.

For example, telematics are already successfully deployed in the automotive sector, improving driver behavior. The shipping sector could also benefit. Insurers such as AGCS are in the early stages of working with ship-owners to utilize Voyage Data Recorder (VDR) analysis to improve safety.

“VDR data is already used in accident investigation, but there are also important lessons to be learned from analyzing everyday operations, as well as crew behavior and decision-making in near-misses,” says Captain Rahul Khanna, Head of Marine Risk Consulting at AGCS.
However, the issue of over-reliance on technology is ongoing and incidents continue to result, particularly around navigation. “Crews and officers must understand the shortcomings and limitations of technology,” says Khanna. “Sometimes replacing common sense decisions with digital inferences is not such a good idea.”

Technology can also be used to improve crew welfare. For example, offshore health problems can often be difficult to address due to location. In response, AGCS, together with Allianz Worldwide Care and Allianz Global Assistance, is now offering crew 24/7 access to medical advice through a dedicated app and on-board equipment. “Such innovative ‘telemedicine’ assistance services can help vessels to make more informed decisions about a crew member’s health, potentially reducing the need to make costly route deviations,” says Ossena.

The threat of cyber-attacks continues to be significant. Most attacks to date have been aimed at breaching corporate security rather than taking control of a vessel. “The shipping sector doesn’t have a particularly heightened risk awareness when it comes to cyber. As no major incident due to a cyber-attack has taken place yet, many in the industry are still complacent about the risks,” says Khanna. As many as 80% of offshore security breaches are estimated to be down to human error. “IT security should not be put on the backburner. If hackers were able to take control of a large container ship on a strategically important route they could block transits for a long period of time, causing significant economic damage.” 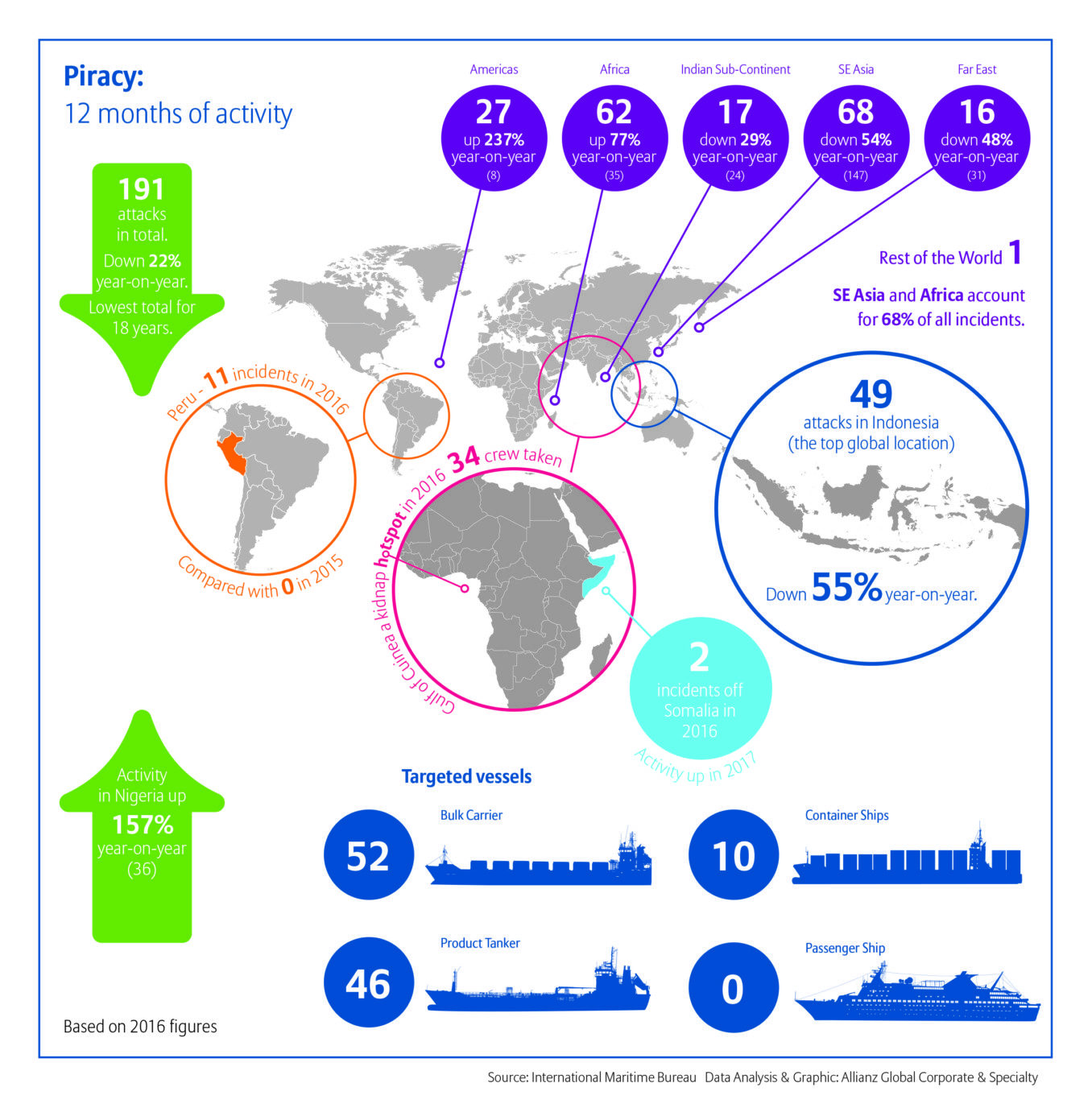 Other risk topics identified in the review include:
·        Structural integrity of vessels: This remains an issue in the wake of a number of incidents and losses resulting from breaches in recent years, particularly concerning vessels that have been converted.