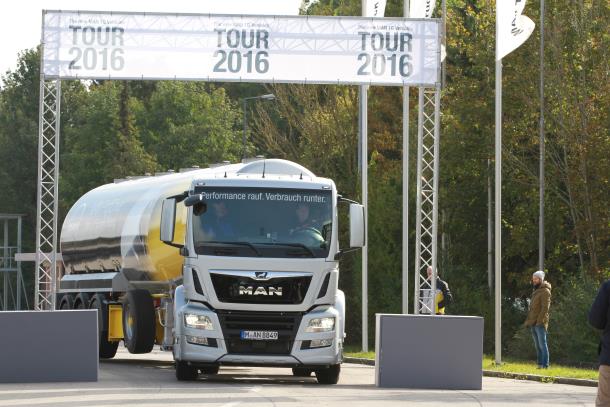 In October, MAN Truck & Bus started its roadshow across Europe with its new TG model ranges fresh from their recent launch at the IAA in Hanover. Over the 9800 km journey, MAN TGX, TGS, TGM and TGL impressed with their new distinctive design and their even more efficient and effective drive trains. Also taking part in the roadshow, as well as making their world debut at the IAA, were MAN TGE and RIO, the new brand for digitally networked logistics.

With eleven large-scale presentation events, the MAN national subsidiaries organised the perfect setting to give European customers a closer look at the numerous innovations, as previewed by MAN for the first time at IAA 2016. The tour took in nine European countries in total, giving more than 4600 visitors the opportunity to experience the new vehicle generation from MAN in action. The option of taking the new trucks on a test drive from Munich proved particularly popular. By the end of the tour, the trucks had been taken for 3300 test drives and had covered a total distance of 170,000 km – more than four times the circumference of the earth.

The test drives carried out by MAN ProfiDrive particularly demonstrated the performance and efficiency of the new drive train generation in the TG model ranges. Numerous measures ensure significantly improved fuel consumption with increased performance and driving dynamics as well as the expected high level of reliability. The new generation D38 engine offers up to 640 hp and delivers plentiful torque – up to 3000 Nm – at low engine speeds. Optimised for fleet applications, the new D26 is available with power ratings from 420 hp to 500 hp and is noted for its low weight and low fuel consumption. In combination with the new versions of the MAN TipMatic transmission with individually coordinated driving programmes for every area of application, the MAN model ranges have highly efficient, economical and environmentally-friendly drive trains.

There was also very positive feedback from roadshow visitors regarding the numerous design innovations in the TG vehicles. Externally, the MAN lion stands proudly in the foreground. TGX and TGS have newly designed and dynamic cooling air intakes. On the inside, warm colours with new materials and seat upholstery lend all TG models a bright and high-quality feel, which is complemented by the distinctive steering wheel design. Furthermore, the driver’s workplace benefits from a new infotainment system, automatic headlight activation and rain sensor in all models. The new MAN MMT Media Truck Advanced infotainment system is available in 5” and 7” screen versions, and offers a wide range of new features such as digital radio reception, effective traffic information, connection options for different auxiliary devices and a truck-specific navigation function upon request.

The roadshow took to the road with a total of twelve new TG vehicles, among them the third generation of the MAN TGX EfficientLine, which offers a 6.35% fuel saving over its predecessor. A TGS 18.420 enabled customers from the tank and silo transport sector to see for themselves the impressive payload capacities and driving safety system performance of the new MAN TGS model range, which made up half of the roadshow fleet due to the diversity of its models. The line-up included the TGS 18.360 all-wheel drive chassis as a winter service vehicle and a TGS 26.500 6×4 timber transport vehicle with an additional hydrostatic front-wheel drive for driving on rough forest tracks. The high performance of the MAN TGS model range in construction applications was demonstrated by a TGS 35.500 8×4 three-way tipper with a particularly manoeuvrable 1+3 axle arrangement with steered and liftable trailing axle, a TGS 32.420 8×4 cement mixer chassis and a heavy-duty crane, likewise mounted on a TGS 8×4 base vehicle and equipped with the new top-of-the-range D26 engine with an output of up to 500 hp.

The organisers of the roadshow included further examples of MAN’s proven expertise in heavy-duty vehicles in their portfolio as static exhibits, namely a three-axle and a four-axle TGX heavy-duty semitrailer tractor, the former with an output of 580 hp and the latter equipped with the 640 hp version of the new D38 engine. The fact that the new top-of-the-range engine version is now also available for most of the standard applications of the TGX equipped with the D38 was demonstrated by the flagship vehicle of the roadshow: the MAN TGX 18.640 as a semitrailer tractor in the exclusive PerformanceLine edition that was presented at IAA 2016. As well as the numerous exclusive interior and exterior design elements, this special series also boasts the top-of-the-range engine with an output of up to 640 hp. With the PerformanceLine edition, MAN has delivered a really high-end product, which both operators and drivers can be proud of.

The important distribution transport segment was represented in the roadshow convoy in the form of a MAN TGM 18.290 refrigerated box truck with an optimised frame structure for an additional payload of up to one tonne and preparation, available ex-works, for a Frigoblock alternator. As a proven specialist in fire service vehicles with many years of experience in this sector, MAN also took a fire service model from the new TGL range on tour. The MAN TGL 8.220 4×2 fitted with an all-steel crew cab that meets all fire service standards was included in the roadshow fleet as an example of the wide variety of standardised fire service solutions for rescue vehicles and fire engines which are available ex-works.

The latest addition to the MAN TGE product family also joined the MAN tour. This commercial vehicle for distribution transport and the building trade covers the 3.0 to 5.5-tonne permissible gross weight range, thus making MAN a full-service provider. The MAN TGE will be available in numerous customisable variants from the sales launch in the spring, boasting the best Total Cost of Ownership (TCO) and an impressive payload of up to 1.5 tonnes. The completely new diesel engine generation installed in the vehicles is characterised by its durability, reliability and economy, promising new peak performances for the new MAN TGE when it comes to efficiency and the environment. At the same time, state-of-the-art assistance systems offer maximum safety and the usual professional service from MAN is, of course, always at hand.

MAN also presented its extensive service portfolio at the eleven tour events. Visitors to the roadshow were able to find out more about the extensive range of financial services and after-sales solutions that MAN offers, as well as the diverse MAN ProfiDrive training programme.

During the tour, MAN provided a special platform for RIO – the new brand from Volkswagen Truck & Bus in the digital solutions sector – and this also attracted a great deal of interest from visitors. RIO is an open, cross-manufacturer business and technology platform that provides individual and uniquely intuitive digital services for the entire transportation and logistics ecosystem. The new digital products and services offered by RIO will enable customers to optimise their logistics processes and manage product flows more efficiently thanks to intelligent networking. From spring 2017, every new MAN truck will feature the technical prerequisites that make it possible to exploit the full potential of these new services. As the initiator of RIO, MAN is responsible for its development within the Volkswagen Truck & Bus Group.