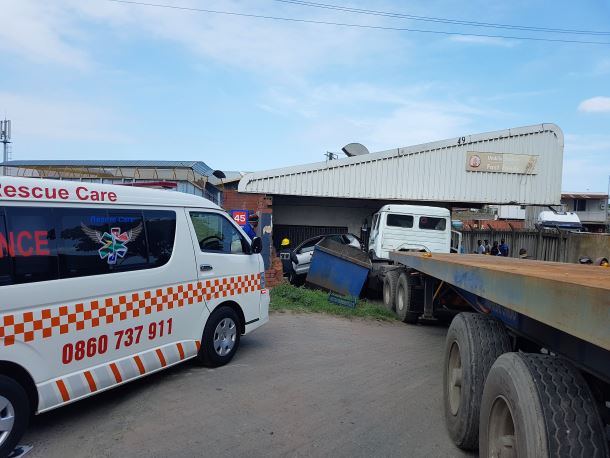 A truck has crashed through a building premises on Sarnia Road near Fennis Close in Umbilo around 2:30 pm today.

Rescue Care Paramedics arrived on the scene and found that a truck had collided with a shop wall before colliding with a stationary vehicle and coming to rest against a building. Paramedics found that a shop owner was entrapped by the broken concrete and pinned against the wall. Advanced Life Support Paramedics worked to stabilise the man on a scene before carefully removing the rubble from him. He was then placed into an awaiting ambulance. An employee of the business was also injured as he was struck by the truck as it crashed through the wall. The truck driver had also sustained minor injuries. All three patients were transported by Rescue Care to nearby hospitals for the further care that they required.

At this stage, the exact cause of the collision is unknown, however, SAPS and Metro Police were on the scene and will be investigating further.