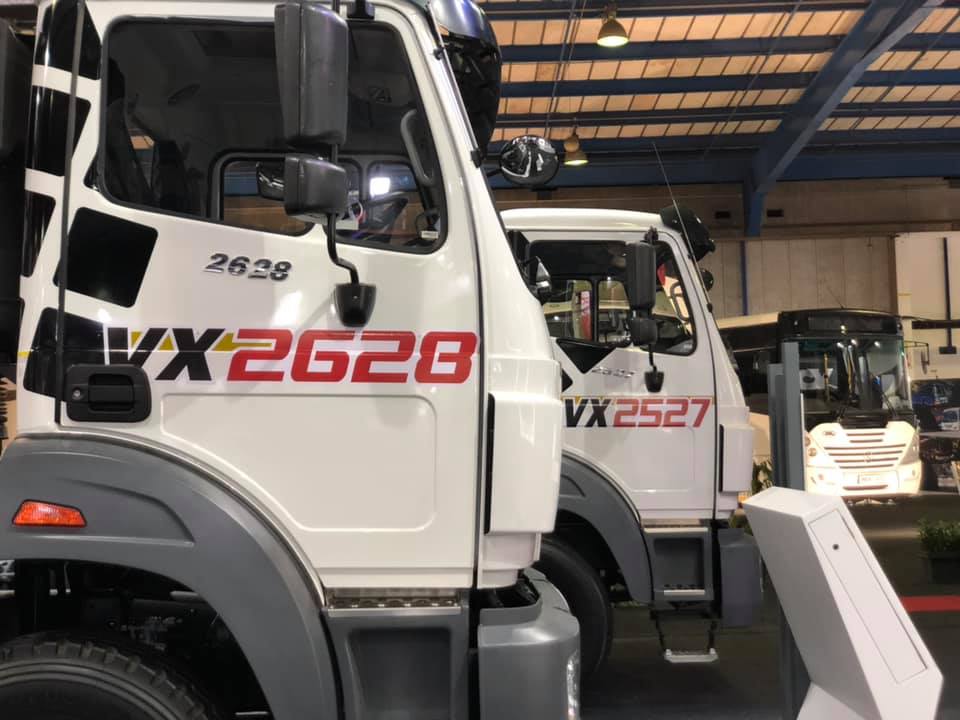 Domestic and export sales of trucks and buses in South Africa remain stagnant in an environment of tight trading conditions, but several local manufacturers are obviously still optimistic about the future as they announced new models and plans to increase sales volumes at the Futuroad truck and bus expo in Johannesburg last week.

Futuroad, the successor to the Johannesburg International Truck and Bus Show was co-located for the second time with Automechanika Johannesburg at Expo Centre, Nasrec from 18-21 September.

UD Trucks, Daewoo Trucks, Tata Motors, Powerstar, and Volvo all staged major media launch events on their impressive stands at the show. The first four companies announced new and additional models while Volvo, which is currently the top seller in the South African extra-heavy truck market, announced important changes and upgrades that will be introduced in the first quarter of 2020.

Jacques Michel, Global Marketing Head of UD Trucks, was on hand to introduce the all-new Quon extra-heavy range, which is the fourth new UD model to be launched in SA in the past five years, following the introduction of the Croner, Quester and Kuzer. It was interesting to learn that SA is the third biggest market in the world for UD trucks.

The new Quon is the first truck range in SA to have fuel-efficient Euro 5 engines as standard. It is fitted with the GH11 11-litre power unit developing 460 hp which is matched to the new ESCOT-VI electronically controlled automatic transmission.

Other advanced features in the new Quon are LED lights, extensive rust prevention measures and sealed hob bearings as well as UD Telematics.

There are eight models in the new Quon range, all 6×4 with a GVM of 26 000 kg and a choice of steel or air suspension.

Daewoo, the Korean truck manufacturer, which is wholly owned by Tata, of India, launched an impressive new extra-heavy truck, the Maximus KL3TX at Futoroad.Daewoo has been in South African for 15 years but will now concentrate only on the extra-heavy segment of the market so there is no conflict between Daewoo and Tata models.  The current vehicle parc of Daewoo trucks in South Africa is estimated at about 6 000 units.

The Maximus uses the tried and trusted combination of a 480 hp Cummins engine which produces 2 509 N.m of torque with either an Eaton or ZF AMT transmission and an Eaton rear axle.

Daewoo sales in South Africa are expected to reach 200 in 2019, with a target of 500-600 units a year in the future. These trucks are sold in 11 other African countries and locally assembled in South Africa and Kenya.

Len Brand, the CEO of Tata Africa, who has been involved with the turnaround of Tata in Southern Africa for the past three years, says his team is now focussing on after-sales backup through its 91 2S (service and spare parts) outlets in South Africa and a further 60 in Africa.  He added that the company was well advanced in setting up its own financial arm to assist customers buying Tata and Daewoo products. A pilot operation in Tanzania is already proving successful.

Tata Trucks has increased its truck range in South Africa by filling some gaps in its product line-up as it prepares to increase its growing market share in Sub-Saharan Africa, in line with its growing penetration in the overall new truck and bus markets on the African continent.

The new models are three additions to the base Prima and Ultra platforms, with the Prima covering the 25-60-ton Gross Combination Mass (GCM) segment, although the top GCM mass in South Africa is limited to 40 tons, and the Ultra models range carry loads of 8-14 tons.

Tata’s long term ambition is to be one of the top three truck and bus manufacturers in the world but in the meantime, it is in the top 5 in Africa and dominant in many South Asian countries near India where it holds more than 50% market share.

Tata expects to sell between 9 000 and 9 500 trucks and buses in Africa this year which will ensure it increases market share. The Tata bus and truck parc in Africa is estimated at about 100 000 units.

Production constraints at its Rosslyn assembly plant is affecting sales but investments into increasing plant capacity will sort this out in the near future. Tata has an aspirational forecast of boosting sales volumes in Southern Africa by 40-45% in the next few years.

Tata has five other assembly plants in Africa besides Rosslyn. These facilities are located in Kenya, Nigeria, Senegal (mainly buses), Ethiopia and Tunisia.

The big news from Volvo was that even more fuel efficient Euro 3 engines will be introduced for the FH, FM and FMX ranges with fuel consumption savings of as much as 3% on long haul operations due to the fitment of new engine hardware – including a different turbocharger – and changes to the software.

Malcom Gush, the Director of Volvo New Truck Sales, said proudly that Volvo had decreased fuel consumption on comparable size engines by more than 50% between 1976 and 2019 with engine power increasing considerably over this 47-year timespan.

Volvo will also be offering a patented disengaging rear axle mechanism on its 6×4 trucks which can result in a 3% fuel saving when the truck is running lightly laden. Another useful addition is a crawler gear in the transmission for manoeuvring in muddy conditions.

However, Gush stressed that nothing saves fuel like a good driver, with savings of as much as 15% being attainable by a well-trained driver.

Volvo will also be piloting a Euro 6 engine using liquefied natural gas (LNG) in South Africa next year which cuts CO2 emissions by 20%. Volvo has already sold more than 3 000 trucks and buses fitted with LNG engines.

Powerstar is not only expanding its range but is targeting increased growth in the long-haul market as it builds on steady sales growth from double digit monthly sales figures in 2010 to selling a planned 700 trucks this year. More than 5 000 Powerstar trucks have been assembled at its Pietermaritzburg assembly plant since 2006.

Powerstar executives also stressed the importance of its joint venture with Foton to provide a comprehensive model range, with the much-improved Foton range in the lower mass categories.