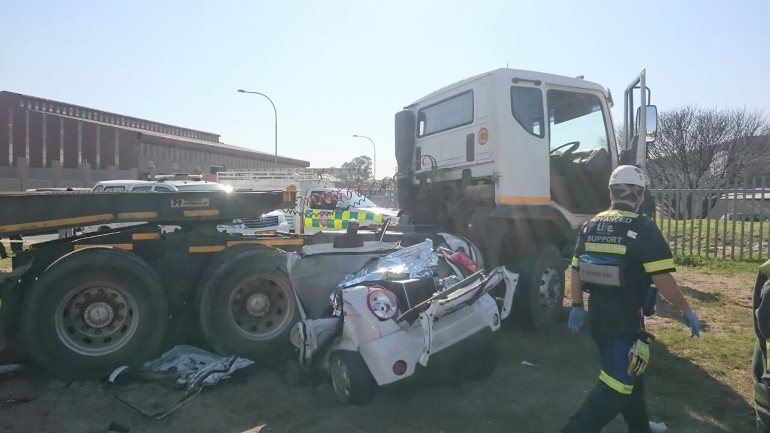 Two men have been killed and one other man injured after a heavy truck crashed into the light motor vehicle and drove over it at the corners of Charl Uys and Neil Hare Road intersection in Atlantis in the Western Cape.

ER24 paramedics, along with Fire, Metro and Life Healthcare, arrived on the scene and found both vehicles on the side of the road. The entire front section of the light motor vehicle was found underneath the truck.

Rescue technicians immediately set out to stabilise the two vehicles from moving any further. A heavy rescue crane from the Metro Rescue was called to the scene, in an effort to lift the truck off the vehicle.

On closer inspection of the vehicle paramedics discovered the bodies of two men lying motionless and trapped inside the vehicle. Unfortunately, both men had already succumbed to their multiple, fatal injuries.

The driver of the truck was assessed by paramedics and found to have sustained only minor injuries. He was treated and transported to a nearby hospital for further treatment.

After some time, rescue technicians were able to lift the truck and remove the light motor vehicle from beneath it. Technicians had to specialised rescue tools to free the bodies of the deceased from the vehicle.

It is believed that one of the deceased had been undergoing a driver’s licence test at the time of the collision.