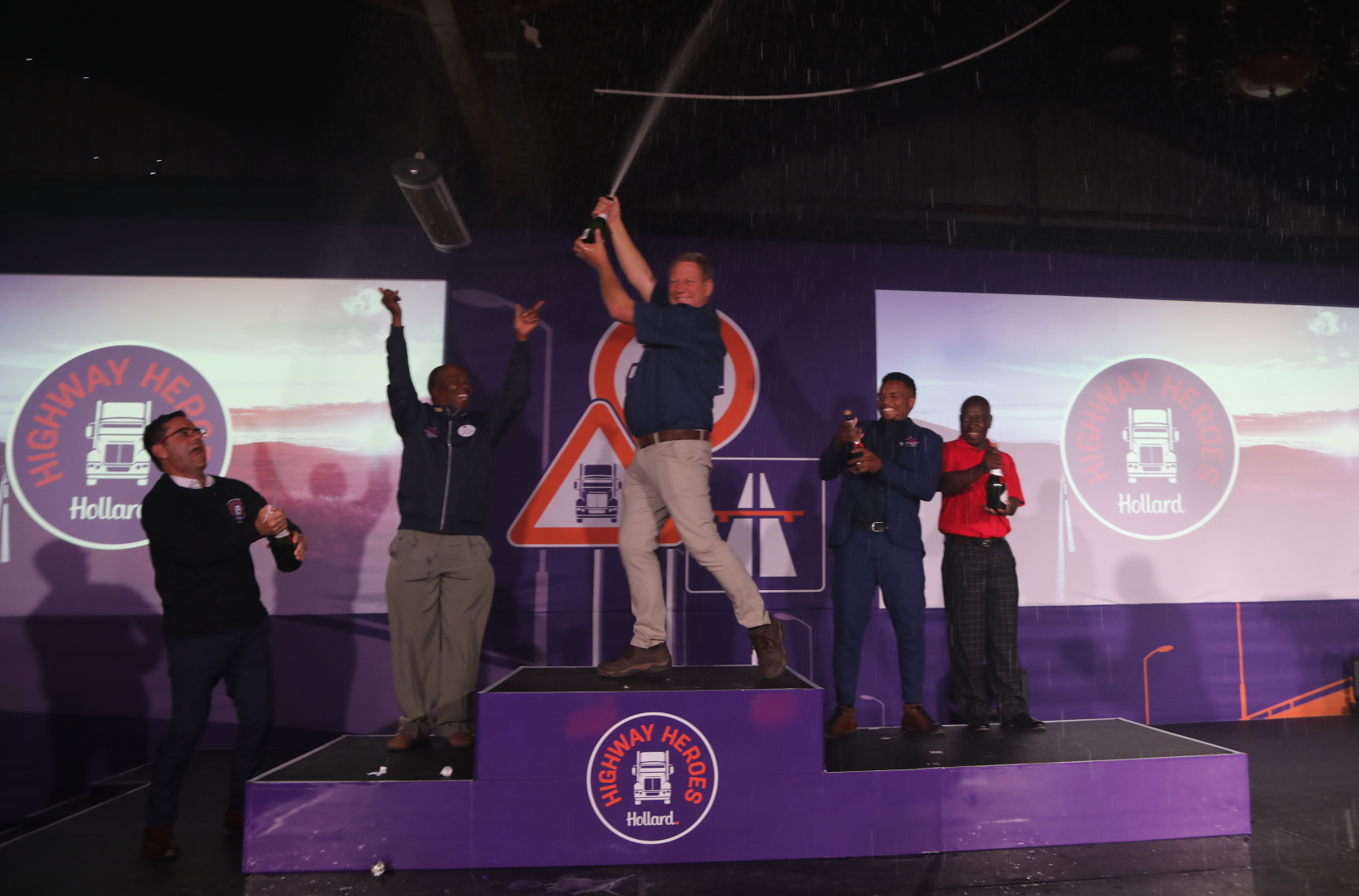 Johannesburg – SA’s best truck drivers were announced last night in the 2019 Hollard Highway Heroes competition and members of the Transport Sector Retirement Fund (TSRF) were right up there with the best.

“This annual competition is the brainchild of Hollard Insure and our Fund received the opportunity to partner this initiative for the first time. We are exceptionally proud to be associated with this competition, and particularly our members who have walked away with top honours in all four categories, and as the overall winner,” said Mdumiseni Mabaso, chairman of the TSRF, who attended the glittering awards ceremony at Emperor’s Palace in Kempton Park last night.

Maartin Langeveld of Swannies Spoed Vervoer was crowned the 2019 Hollard Highway Hero and received a R100-thousand cash prize – the richest prize in South African trucking – for being the country’s most skillful driver.

“I told my employer, ‘We’re going to do it this year,’” a beaming Langeveld said after being announced as the 2019 Highway Hero. “And when I made the top 50, there was no turning back.” Langeveld said he planned to use his R100 000 prize money towards renovating his home in Kimberley.

Participants competed in four categories – Tippers, Tankers, Flat Decks and Tautliners – with the category winners ultimately facing off for the grand prize of R100 000. Category winners take home R25 000 each, with the rest of the top 50 drivers also pocketing prize money according to the position they achieved.

Hollard Highway Heroes competition was opened to all truck drivers this year to recognise the efforts of many in the transport sector and to magnify the overall benefits that it affords every road user.

“A 64% improvement in driving were recorded during the competition, and because Hollard Trucking’s Risk Services Bureau monitor many of the entrants beyond the competition, Hollard they can confirm that these top drivers maintain their good driving habits into the future,” explained Elka du Piesanie, the Highway Heroes manager.

“Congratulations to our winners. You are shining examples of excellence.  And thank you to all our members who work tirelessly and stay committed to making our world, and indeed our roads, a better and safer place. We understand what it demands of you to do your jobs well, and we honour you for your determination and perseverance,” ended Mabaso.

South Africa’s transport sector is an ever-evolving industry bringing dynamic mobility to our society as it supports the movement of goods and people. In this endeavour, market forces, socio-economic impacts and people-centred concerns all play a vital part in the sustainability of the sector.

“Our transport sector is one of the cornerstones of our economy contributing 17% to the country’s GDP and creating almost 30% of formal employment opportunities. These figures underline the direct value the transport industry contributes to the sustainable development of the nation. Without it our economy would grind to a halt,” stresses Mdumiseni Mabaso, chairman of the Transport Sector Retirement Fund.

In a fluid and fast changing transport environment the TSRF aims to be the constant factor within members’ lives, on which they can both rely and depend, whether they are still gainfully employed or retired.

In 2017, the Fund successfully transitioned from the Road Freight and Logistics Industry Provident Fund to what is now known as the Transport Sector Retirement Fund. With this transition, the Fund expanded its sphere of operations to encompass the broader transport sector. The expansion also resulted in the Fund changing its rules to become an industry umbrella fund offering improved death-, disability- and funeral cover to its members without increasing their costs.

The original Collective Bargaining Council Agreement was cancelled in 2014. As an umbrella fund, the TSRF, now offers greater stability and security to its members no matter by whom they are employed within the broader industry.

Some of the TSRF’s investment projects include the development of good quality truck stops along our country’s major transport nodes.

“Our aim is to create safe and efficient transport hubs along our major routes. The TSRF holds a 50% share in the Highway Junction Truck Stop near Harrismith which is proving so successful that the Fund is expanding this concept to five more sites near Cape Town, East London, Colesberg, Klerksdorp and Musina.

Hollard Highway Heroes has its origins in a driver training initiative by trucking insurance specialist Regent Insurance, which was acquired by Hollard in 2017. Between 2015 and 2017 it was known as Regent Highway Heroes, with Hollard taking over naming rights from 2018.

The competition has grown in leaps and bounds since 2015, when 220 drivers entered, to 3 213 entries this year. It has also changed in format, to level the playing field across truck types and trucking sectors; in 2018 the four main categories (Tankers, Tippers, Tautliners and Flat Decks) were introduced, each with four subcategories (Long Haul, Short Haul, Cross-border and Route-specific). In 2019 Highway Heroes was thrown open to all truck drivers, irrespective of insurer.

For the first time in 2019 Hollard Highway Heroes welcomed industry sponsors on board. They are: Fidelity SecureDrive, the Transport Sector Retirement Fund and Ctrack. The competition has also partnered with Arrive Alive, FleetWatch magazine and MasterDrive.