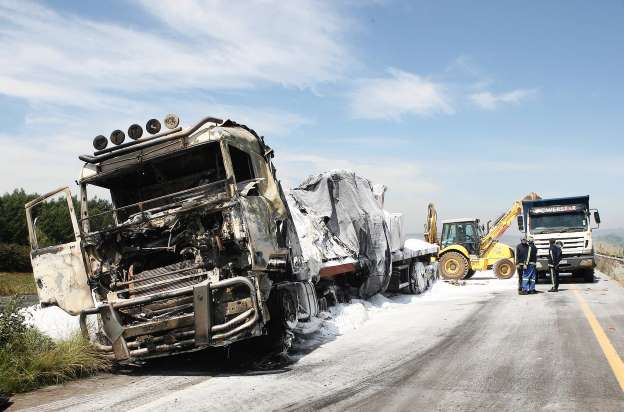 “It’s alleged that the (complainant) was driving on the N3 freeway, Mooi River, when he noticed a group of protesters throwing stones at his truck. He stopped the truck, fled the scene and he later found the truck burning,” she said.

The incident comes after seven trucks were burned in Mooi River last month. The violence started after local unemployed truck drivers alleged that freight companies hired foreigners instead of locals to drive their trucks.

A truck owner, speaking on condition of anonymity, said: “We have to keep our trucks on the road to be in business, but I’m very concerned about my trucks.”

He added that truck owners were worried about the lack of government action to address the matter. “Since we met with government officials, there has been no movement, there are no police on the N3. If the area is a hot spot, it doesn’t make sense not to police it.”

Sipho Zungu of the All Truck Drivers Foundation said they heard rumours that trucks were burned but knew nothing about it and their foundation was not involved in such behaviour.

He said since their meeting with Positive Freight Solutions last month there had been no new developments. Attempts to speak to the Department of Transport were unsuccessful.