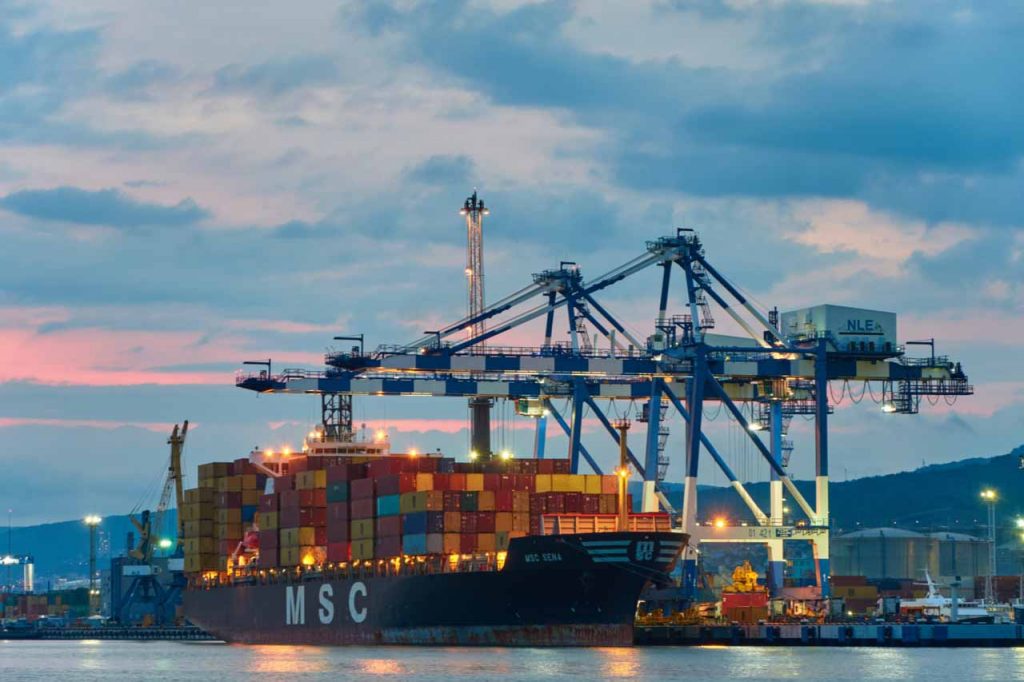 Unbeknown to most is the fact that the world’s busiest shipping trade route is no longer across the Atlantic but rather between China and the West Coast of the USA, and the same trend is emerging in terms of Air Freight.

Trade between Asia and Europe is now the second busiest while the cross Atlantic trade languishes in third place.

Despite this increase in traffic, the busiest ports in the United States still close their gates at night, causing ships to wait for up to three weeks for their turn to dock. More than 60 large container ships have been waiting outside the ports of Long Beach and Los Angeles for the last few months, exacerbated by a 15 percent increase in the number of containers arriving at US ports.

Chinese ports are also experiencing capacity constraints but are very often waiting for ships to return from the ports on the West Coast of the USA. 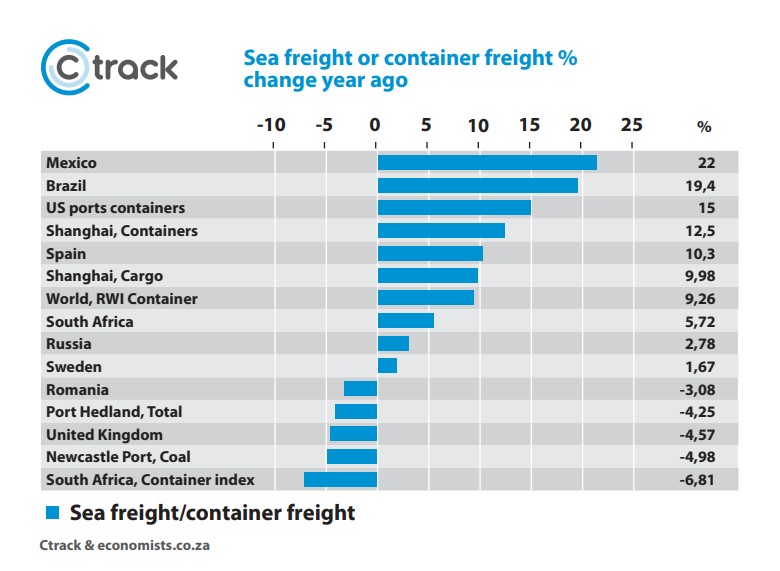 These delays are made worse by ongoing disruptions to the global supply chain, including the Evergreen Accident in the Suez Canal, riots and computer hacks in the Port of Durban, electricity shortages in China and Europe and the general mess caused since COVID-19 hit China at the end of 2019. Since then, ships have been out of position, but the thinking was that everything would return to normal within a couple of months.

Two years later, the schedule is yet to return to normal as cross border movements on both land and sea have become more difficult globally and have now resulted in a container shortage.

“It is no secret that the global supply chain is facing unprecedented disruptions caused by the COVID-19 pandemic as well as a variety of external factors in various markets. The uncertainty and unpredictability of doing business in such an environment once again highlight the importance of a reliable tracking and logistics management partner,” says Hein Jordt, Managing Director of Ctrack SA.

Despite global trade becoming increasingly difficult, it is still showing growth in terms of a share of world value-added. Global sea freight container volumes are up 13,2% on a year ago while Air Freight has grown 8,6%, but is still 10% below its all-time high, which was reached before the start of the global pandemic. In many cases, vaccine distribution is a priority, meaning that other freight must wait.

South Africa has felt the impact of the KZN riots and the Transnet hack, but more disruptions are likely.

The Ctrack Freight Transport Index clearly shows that South Africa suffered its own disruptions in July. Global trade growth and the necessary catch-up are creating its own problems, which will continue to impact South Africa.

During the last three months, the global supply chain disruptions have been felt locally by the internationally linked freight sectors, namely Sea Freight and Air Freight.

Air Freight worldwide is growing as the rates of Sea Freight have skyrocketed, making Air Freight more viable in some cases. However, the capacity constraints are of such a nature that a low volume destination like South Africa loses some traffic due to high margins elsewhere, which diverts specialised planes and containers from local routes.

The congestion at US ports also means that containers are stuck on vessels, causing delays, leading to further delays in arriving in South Africa. 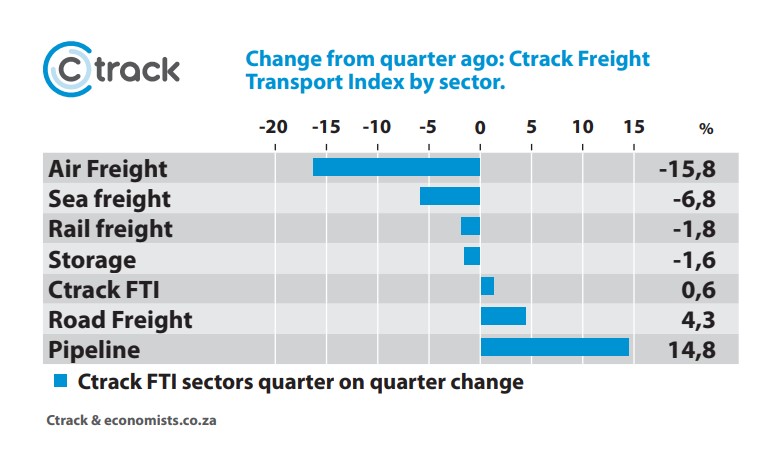 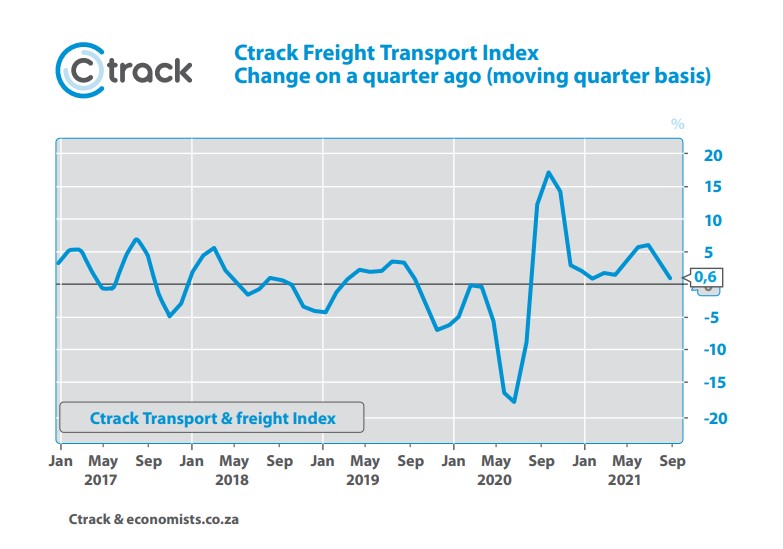 The overall Ctrack Freight Transport Index recorded a 0.6% increase over the quarter ending in August. This is a great reflection of the overall impact of the July riots and warehouse looting, as well as the Transnet container hack. The month of August has already seen a positive impact due to rebuilding and restocking efforts, but this must be carefully considered as the global supply constraints are yet to be factored into this algorithm.

The Ctrack Freight Transport Index and its Subsectors

A positive increase of nearly 15% in the Pipeline index can be attributed to oil companies looking to satisfy reviving consumer demand for petrol and diesel as consumers filled tanks ahead of the massive August fuel price hike. The pre-increase buying led to empty fuel stations, which then ordered extra fuel from the refineries.

Moreover, despite the disruption in the ports and on the main KZN and Gauteng roads, road transport returned to a growth trajectory and grew 4,3% compared to the previous quarter. Due to ships not offloading as much cargo, retail stock levels declined, and retailers had to source stock from warehouses they do not usually use. At the same time, the rebuilding and restocking of some shops also helped the Road Freight sector.

What is clear is that the Transnet hack and the riots exposed the South African Freight Transport sector to several unusual risks.

Many manufacturers and retailers are currently concerned about Christmas stock levels, while toymakers and book retailers have issued warnings about increased shipping costs.

World transport costs are increasing at an alarming rate

On average, shipments are currently running eight weeks late. This means that goods that were supposed to arrive in September are now only expected in December and could mean that stores in many parts of the globe will be understocked come the Black Friday weekend.

“Ctrack have the technology to track and trace any moveable asset no matter its size, and while this might not speed up the transportation of goods under current circumstances, it can help businesses plan for these delays more effectively by eliminating any surprises”, said Jordt. 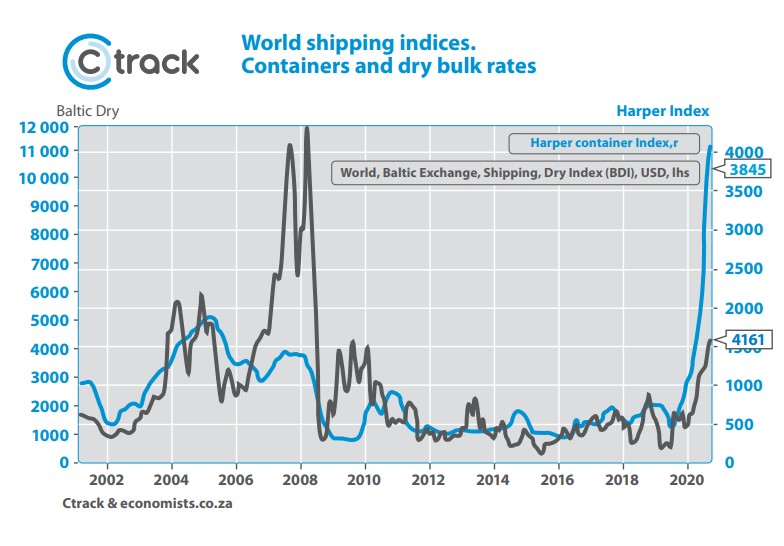 According to the Wall Street Journal, the cost of renting a 40-foot shipping container has increased 10-fold on the China to US and Europe routes. While it is not yet the case, South African trade is under threat of rising prices too.

With oil prices also increasing to three-year highs, one can expect Road Freight costs to increase way beyond current inflation levels. Moreover, the cost of storage in some areas is also set to increase as insurers insist on added security measures.

Rail Freight once again recorded a decline over the quarter, attributed to stoppage during the riots in KZN and in some cases due to cable theft across the country.

Clearly, the South African supply chain has been damaged too but is certainly still delivering the goods, albeit slightly late. 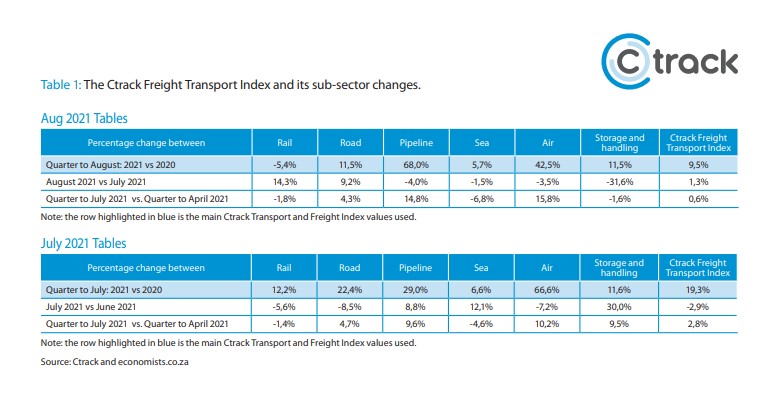 On behalf of Ctrack South Africa