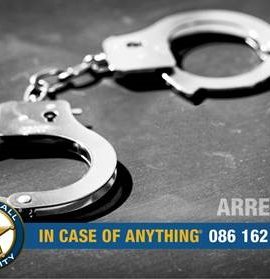 Two men have been arrested thanks to a proactive Marshall Security Armed Response officer this morning. Whilst on routine patrol, the armed response officer noticed two men, walking along Chris Hani (North Coast) Road, carrying a truck battery and various items of aluminum, believed to be stolen. On questioning the men it was later ascertained that the […]