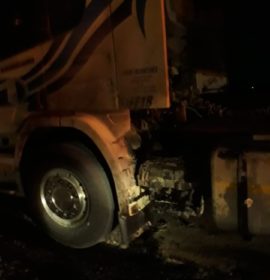 Emer-G-Med responded to a collision on the N3 North, at 42nd Hill where a truck was petrol bombed. No injuries on scene. Local authorities were on scene for investigations. Truck petrol bombed on the N3 https://t.co/vtHjCRC5eE #ArriveAlive @EMER_G_MED @TruckAndFreight pic.twitter.com/YgcAvrKds4 — Arrive Alive (@_ArriveAlive) August 12, 2019