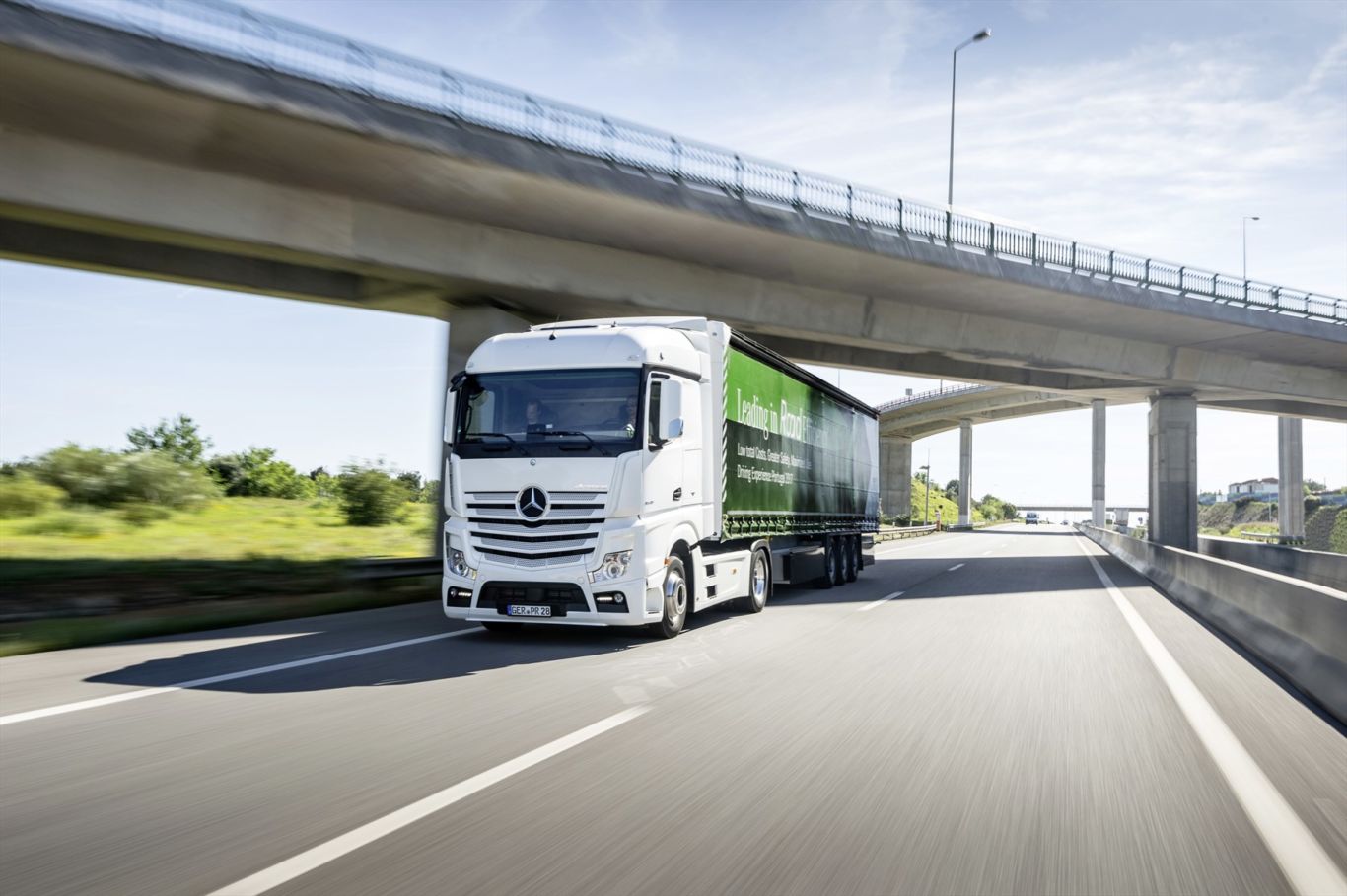 Daimler Trucks increased its worldwide deliveries in the first eleven months of 2017 by 12 percent year on year to 422,500 units, despite the continuation of disparate market conditions. Until the end of November, more trucks were delivered than in the whole of last year. In full-year 2016, the Daimler truck division sold approximately 415,100 vehicles of the Mercedes-Benz, FUSO, Freightliner, Western Star, Thomas Built Buses and BharatBenz brands worldwide.

On the basis of initial December data, Daimler Trucks assumes that it will end the full year with unit sales in the magnitude of 465,000 vehicles (2016: 415,100). The final sales figures will be available at Daimler’s annual press conference on February 1, 2018.

“For full-year 2017, we at Daimler Trucks anticipate unit sales in the magnitude of 465,000 trucks – significantly more than in the previous year and significantly more than we expected at the beginning of the year. This is only possible with leading products and an excellent international team – especially with an ongoing situation of weak tailwinds from our markets. I thank all our employees for their outstanding efforts,” stated Martin Daum, Member of the Board of Management of Daimler AG, responsible for Trucks & Buses.

“In everything that we do, our focus is on our customers. In order to offer them the best products and solutions, we work continuously on innovations. We used the year 2017 to work hard on efficient, electric, automated and connected trucks. In the same way, we will be sustainably successful in 2018 – the year of the IAA Commercial Vehicles show – and beyond.”

Significant growth in unit sales thanks to growth in North America

The significant growth in unit sales achieved by Daimler Trucks was driven by the positive sales development in the NAFTA region, especially in the second half of the year. Although, as expected, the development of the North American market was slightly weaker than in the previous year, Daimler Trucks increased its sales in the first eleven months of the year by 12 percent to 150,600 units (2016: 134,200). With a market share of 39.2 percent in weight classes 6 to 8 (2016: 40.0 percent), Daimler Trucks continued to be the undisputed market leader for medium- and heavy-duty trucks in North America by a clear margin. A key reason for the truck division’s success in the North American market is the new Freightliner Cascadia, which has been produced since early 2017 with an integrated Detroit powertrain and sets standards in terms of fuel efficiency, safety and connectivity. Also in the fourth quarter, Daimler Trucks recorded a significantly higher number of orders received in the NAFTA region than in the prior-year period.

Daimler Trucks increased its sales also in the EU30 region (European Union, Switzerland and Norway) by three percent to 73,600 units in the months of January through November (2016: 71,100). Mercedes-Benz maintained its market leadership in the segment of medium- and heavy-duty trucks with 21.0 percent (2016: 20.7 percent). Mercedes-Benz is the best-selling brand also in Germany, with a market share of 36.6 percent (2016: 37.2 percent) and deliveries of 28,000 vehicles (2016: 27,600). Since March 2017, Mercedes-Benz trucks feature the new Truck Data Center. This standardized connectivity module is fitted across the Daimler Trucks brands: in the Mercedes-Benz Actros, Arocs, Antos and Atego as well as in the new Freightliner Cascadia and the new FUSO SuperGreat. The Truck Data Center forms the basis for existing connectivity solutions from Daimler Trucks such as the telematics systems of Fleetboard, Truckonnect and Detroit Connect. However, it also allows new digital services such as the Mercedes-Benz Uptime service product. This intelligent linking up of trucks, Mercedes-Benz Service and customers can reduce off-road times.

Due to the improved investment climate and thanks to optimized dealership structures, Daimler Trucks was able to more than triple its deliveries in Russia to 7,800 vehicles (2016: 2,200; +254 percent). In Turkey, Daimler’s truck division achieved sales growth after the weak development in the previous year and delivered 9,500 vehicles, which is 20 percent more than in the prior-year period (2016: 7,900). The Daimler company in Turkey had its 50th anniversary in the summer of 2017. Daimler has produced buses since 1967 and trucks since 1986 in Turkey.

In Latin America, sales of 27,300 vehicles by Daimler Trucks in the first eleven months of the year were nine percent higher than in the prior-year period (2016: 25,100). There was a strong contribution from the positive sales development in Argentina, where 5,200 trucks were delivered to customers (2016: 3,500; +47 percent). In the region’s main market, Brazil, Daimler Trucks increased its unit sales by eight percent to 12,200 vehicles (2016: 11,200). With a market share of 28.3 percent in the first eleven months, Daimler Trucks once again achieved a top position in this important truck market (2016: 29.3 percent). In the next five years, Daimler will invest approximately 600 million euros in Brazil in the modernization of its range of trucks, in digital services and in the two local production plants. This means that Mercedes-Benz Trucks is ideally positioned for the upturn of customer demand expected for the Brazilian market in the medium term.

In Japan, sales of 40,700 units in the first eleven months were just under the prior-year level (2016: 42,000) and market share was 19.3 percent (2016: 20.3 percent). The new SuperGreat heavy-duty truck demonstrates FUSO’s goal of further consolidating its position in the Japanese market and sets standards for efficiency, safety and connectivity. Like the latest heavy-duty trucks from Mercedes-Benz and Freightliner, the new FUSO flagship makes use of components from the global platform strategy; in addition to a standardized electric/electronic architecture including the Truck Data Center, it also features a shared powertrain.

In Indonesia, Daimler Trucks profited from the growth dynamism of the overall local truck market. Sales of 37,600 units in the first eleven months were significantly higher than the prior-year number of 24,400 trucks sold (+54 percent). At the local production plant in Wanaherang, a Mercedes-Benz truck drove off the assembly line for the first time in 2017. This vehicle now supplements the market-specific range of locally produced FUSO models as a heavy-duty truck with the three-pointed star, and is used primarily on construction sites. With the FUSO brand, Daimler Trucks has had a very strong positon in this southeast Asian country for more than 40 years.

Although the overall market in India was smaller than in 2016 – as a result of regulatory and tax changes especially in the first half of the year – Daimler Trucks significantly increased its unit sales in the fifth year since the launch of the BharatBenz brand. From January through November, 15,200 vehicles were delivered (2016: 12,100; +26 percent). Market share increased by 2.3 percentage points to 9.0 percent. The plant in Chennai produces BharatBenz trucks not only for the local market, but also for export, meanwhile to more than 40 markets in Asia, Africa and Latin America. In the Middle East, deliveries grew significantly by 31 percent to 21,000 vehicles (2016: 16,000).

In China, the world’s biggest vehicle market, Daimler holds a 50-percent interest in the joint venture Beijing Foton Daimler Automotive Co. Ltd. (BFDA), the producer of medium-duty and heavy-duty trucks under the Auman brand. Along with the significant market recovery in China, sales of 104,600 Auman trucks in the first eleven months were significantly higher than in the prior-year period (2016: 68,800; +52 percent). Unit sales by the joint venture are not included in the consolidated sales of Daimler Trucks.

In addition to its sales success in the various markets, Daimler Trucks was successful also in extending its technology leadership: keyword “fully electric truck.” The development team continued its intensive work on the electrification of the heavy-duty Mercedes-Benz truck. The so-called innovation fleet will be on the roads already in 2018: The fully electric Mercedes-Benz heavy-duty truck for distribution transport will be in normal use with customers and – in close consultation with the customers – will be further developed towards market maturity and series production.

In the year 2017, the first fully electric FUSO eCanter light-duty trucks from series production were handed over to customers. FUSO eCanter trucks are already in operation for the logistics company UPS in the United States and for the Seven-Eleven supermarket chain and Yamato Transport in Japan. In Europe, the globally active logistics companies DHL, DB Schenker, Rhenus and Dachser took delivery of new eCanter trucks in mid December. Over the coming years, FUSO plans to deliver a total of 500 trucks of this generation to selected customers. Large-series production is planned for 2019. Depending on superstructure and application, the eCanter has a payload of up to four and a half tons. The batteries weigh approximately 600 kilograms and allow a range of more than 100 kilometers, which in many cases is more than the daily distance covered in light distribution transport. The eCanter is not only environmentally friendly, it is also cost-efficient and economical for customers. Compared with a conventional diesel version, operating costs of up to 1,000 euros per 10,000 kilometers can be saved.

With its brands Mercedes-Benz, Freightliner and FUSO, Daimler Trucks has been doing pioneering work for many years in the field of automated and connected driving. Worldwide, Daimler Trucks has meanwhile connected approximately 500,000 trucks with the internet of things – more than any other manufacturer. Daimler is the first truck producer to test the use of digitally connected trucks –s o-called platooning – on public highways in the United States. Truck platooning uses connectivity and automated driving to increase safety with trucks driving in a convoy, as well as making the drivers’ work easier and improving fuel efficiency due to smaller gaps between the vehicles. As of 2018, Daimler Trucks North America will test the digital coupling of trucks in normal transport operation together with large fleet customers. Already in April 2016, three connected and autonomously driving Mercedes-Benz Actros trucks drove from Stuttgart to Rotterdam in the context of the European Truck Platooning Challenge.

In a so-far unique test, Daimler Trucks presented another potential solution for the future use of commercial vehicles driving in automated mode in the fall of 2017. Following a successful demonstration of the innovative Highway Pilot and Highway Pilot Connect systems, which allow truck platooning, the truck division presented a further stage of development along the way to the fully connected and autonomous truck. On an airfield, the world’s leading manufacturer of commercial vehicles demonstrated – as specifically requested by a customer – how automated snow removal can be practically implemented at airports. Four Mercedes-Benz Arocs semitrailer tractors cleared the snow from the airfield in automated mode and in conjunction with each other by remote control. The advantages are clear, as the need for snow removal in winter is hard to predict and plan. Other applications such as driverless operation in mines, at container terminals or in other closed-off areas are also conceivable.