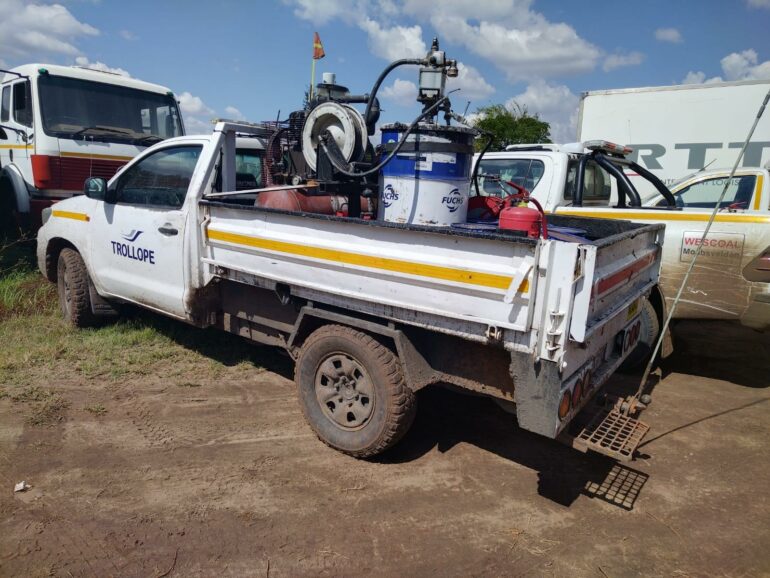 The Provincial Commissioner of the SAPS in Mpumalanga, Lieutenant General Semakaleng Daphney Manamela has applauded members of the Delmas Detectives for their swift arrest of a 31-year-old male suspect. He was apprehended in connection with a robbery that took place at Wescoal Mine in Delmas earlier today, Wednesday 06 April 2022 at about 02h00 am.

According to the information, a group of armed suspects stormed into the said mine where they overpowered the security guard and held four victims, including the Supervisor, the Geologist, the Mechanic, and the Guard at gunpoint. It is said that the suspects used cable-ties to tie their victims before they rob them of three bakkies, a diesel bowser with 1000 liters of diesel as well as a water pump. They then drove off in three bakkies, with their victims at the back of one of the bakkies. It is also reported that two of the bakkies were pulling trailers, one with diesel and the other with water pumps. The suspects are said to have driven via Kendal gravel road and after about three kilometers from the mine they abandoned the bakkie which the four victims were held and tied then they fled in the other two bakkies.

A report further indicates that the mechanic managed to loosen himself and freed the other three before alerting the Bidvest Security Company who then reported the incident to the police at Delmas. A business robbery case was opened and members of the Detective Branch were assigned to probe the incident. A team consisting of experts in the field of investigation was assembled and they immediately began tracing the suspects.

At around 13h00 today (06 April 2022) they cracked the case and recovered the two vehicles that were robbed. The cars were found at Botleng, one at the graveyard and another next to Syco Gondwe Sports Grounds (Stadium). On further investigation, the team of investigators managed to arrest the suspect as well as recover the alleged stolen diesel bowser in the bushes near R42 Road, which is not far from the said mine.

Preliminary investigation suggests that the suspects were probably busy draining the diesel into some plastic diesel containers when one of them was caught. Meanwhile, other suspects evaded the arrest and are still at large however a vehicle that they allegedly used, a maroon Toyota Corolla was seized with diesel cans full of diesel. The vehicle was confiscated as it was allegedly used in the commission of a crime.

The suspect is expected to appear before the Delmas District Court on Friday, 08 April 2022 facing charges of being in possession of suspected stolen properties and more charges could be added against the suspect in relation to the business robbery.