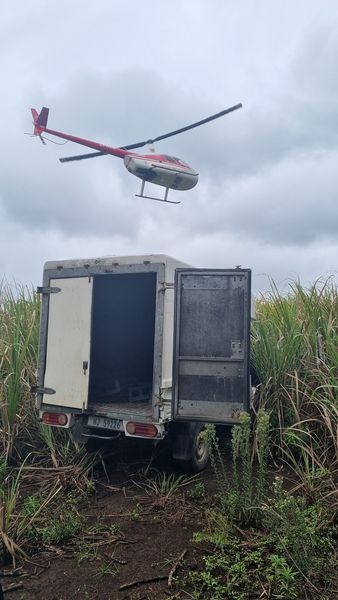 A bread delivery truck that was hijacked from Inanda, KZN by three armed suspects was recovered by a member of Reaction Unit South Africa (RUSA) flying in Iqadi near Osindisweni.

Tracker contacted RUSA at approximately 08:51 after receiving information that the hijacked truck was emitting signals nearly 28 kilometres away from Verulam.

The RUSA Robinson R44 helicopter was conducting aerial patrols around Brindhaven, KZN when the Pilot In Command routed in the direction of the sought-after truck. He spotted the vehicle in a sugar cane plantation shortly after flying over Osindisweni Hospital.

Reaction Officers were directed to the bakkie that was abandoned with the keys in the ignition. The suspects made off with 1000 loaves of bread. The suspects fled prior to cutting open the safe fixed inside the vehicle. According to the driver, the suspects were driving a Hyundai H100 bakkie.

The driver was not injured.