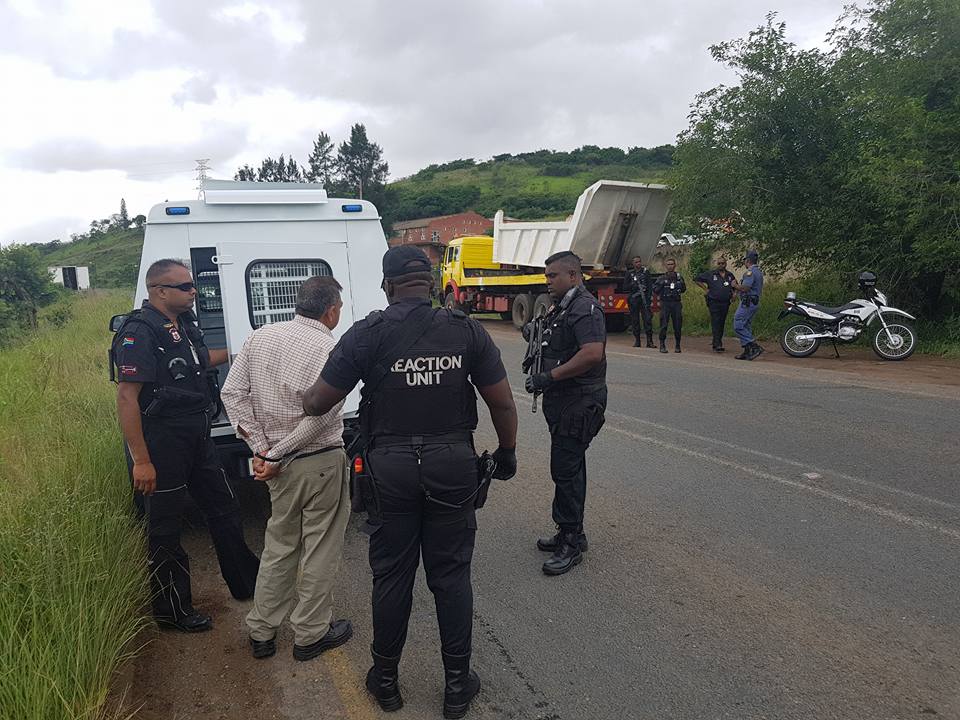 A 63 year old Umhlanga Ridge resident was arrested by members of Reaction Unit South Africa after he was found in possession of a stolen truck this morning (Thursday).

RUSA received information yesterday that a Mercedes Benz tip truck that was stolen from Mtubatuba, north of Durban, was being towed to Waterloo in Verulam. The caller could not provide an exact location of where the truck was dropped off however provided landmarks of the suspected location. A case of theft of motor vehicle was registered at the Mtubatuba SAPS.

Reaction Officers worked throughout the night and confirmed that the truck was dropped off at a vacant plot near a housing complex in Waterloo. Further investigation establised that the an Indian male driving a white Isuzu bakkie with a Maputo – Mozambique registration had purchased the stolen vehicle.

Reaction Officers tracked the elderly man to his business premises on Oakford Road. Upon arrival Officers found the bin of the stolen truck loaded onto a tow truck (Picture 3) which was in the process of being moved. A further search of the property was conducted and the stolen truck, which was in the process of being stripped was recovered (Picture 4, 5 & 6). The Isuzu bakkie that was used by the suspect was also found on the premises.

Officers interviewed the businessman who repeatly changed his version of events regarding knowledge of the stolen truck. He eventually confirmed that he had purchased the truck, which is valued at several hundred thousands of rands for R70 000. He could not provide any documentation to confirm that he had legally purchased the vehicle. The suspect attempted to bribe Reaction Officers after he was placed under arrest.