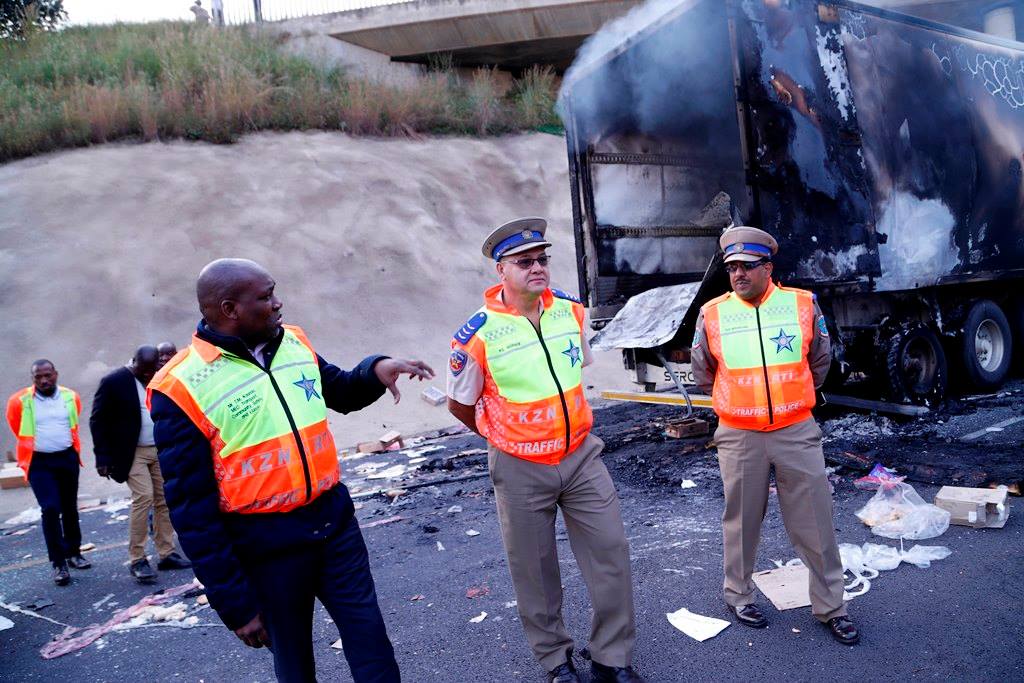 The KwaZulu-Natal MEC for Transport, Community Safety and Liaison, Mr. Mxolisi Kaunda, has condemned the burning of and looting from trucks in Mooi River Toll Plaza, which has resulted in the blockading of the freeway since last night.

Police received a report of stone throwing at the toll plaza and when they went to investigate, they found two burning trucks and people who were looting goods from the trucks.

Kaunda visited the scene this morning and described the incident as criminal and urged the police to speed up the investigation to ensure that those who are responsible for the incident are brought to book.

Since last night, 27 trucks have been torched with cargo and 54 people have been arrested for looting. They are currently being detained at Mooi River police station. One of the burnt trucks was carrying light motor vehicles.

The incident is believed to have been sparked by truck drivers who are complaining about the employment of African Nationals within the industry.

Kaunda said that the Department of Labour is intervening in the dispute working with the employers and drivers associations.

“The provincial government is in the process of signing a protocol agreement with the Department of Labour to assist law enforcement officers to deal with African Nationals employed illegally within the logistics sector. The Department of Labour is also going to conduct labour inspections on the companies that are accused of employing foreign nationals at the expense of locals,” said Kaunda.

Kaunda has convened an urgent meeting with the police management this morning and developed a policing plan for the area. Since last night, police visibility has been heightened in the area until the situation returns to normal.

Specialised police units will also be permanently stationed in Mooi River to deal with crime in general in the area.

Kaunda said the incidents portray a bad image about the province, particularly the Mooi Mpofana Municipality.

“We strongly condemn this incident with the contempt it deserves as it impacts negatively on the economy of the province, and that of the country. A similar incident occurred two weeks ago and strong measures must be put in place to secure the area,” said Kaunda.

KwaZulu-Natal transits an estimated 70% of South Africa’s import and export cargo, which passes through the Durban and Richards Bay ports.

Mooi River is one of the areas hardest hit by poverty in the province and government has developed a comprehensive poverty alleviation plan which includes the resuscitation of industries and farms in the area.

“We are, however, worried that these acts of criminality might discourage investment if they continue and do drain the capacity of the law enforcement teams already stretched across the province,” said Kaunda.

Kaunda will return to the area to hold public meetings to address the issue of crime and looting of trucks by members of the community.

Emergency services are currently removing the wreckage of burnt trucks from the road and it is anticipated that both north and southbound lanes will be opened.