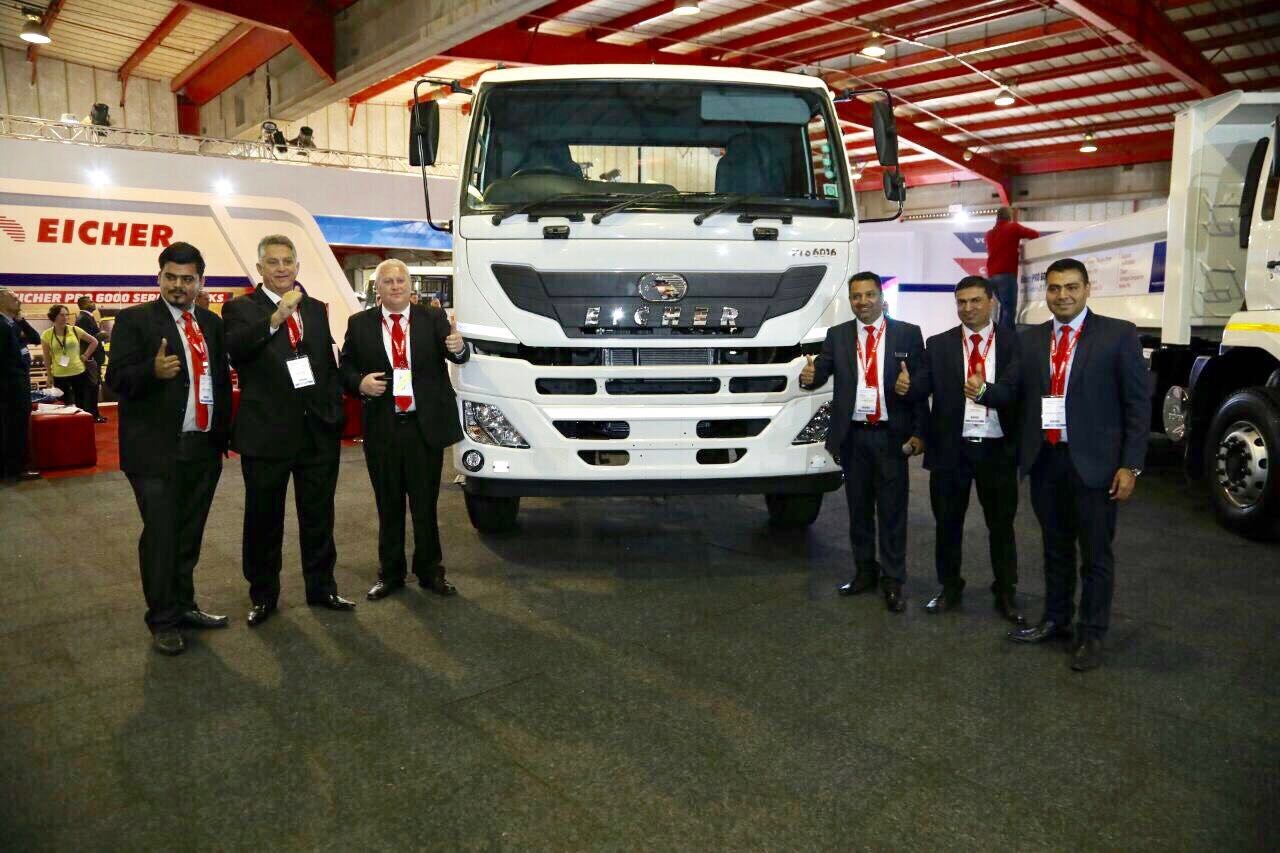 The truck industry in South Africa is certainly optimistic about the future, judging by the launch activity on the opening day of Futuroad, the truck and bus show which is co-located with Automechanika Johannesburg at Expo Centre, Nasrec.

Several of the new models were launched by comparative newcomers to the local market, Tata, Powerstar and Eicher, while long-established Hino showed its new Wide Cab 500 to the public for the first time. This latter model goes into local production in November, after which it will be distributed to the network of 66 dealers.

Several executives from Hino Japan came to South Africa to attend this launch which sees the Wide Cab 500 range expand from five models to 12. The visitors included Shuichi Kaneko, Senior General Manager – Sales and Marketing, and Masahiro Kumasaka, Senior General Manager – Product Planning. The Hino display featured two examples of the new Wide Cab 500, as well as a 700 truck-tractor, a 300 medium commercial and a Dyna, which is now classified as a light commercial vehicle.

Chinese truck manufacturer, FAW, which has been present in South Africa since 1994, has been on a big push in recent years, which included building an assembly plant at Coega, near Port Elizabeth. This strategy is showing in terms of the increasing sales of FAW trucks, both locally and into African export markets. The FAW display include a preview of the 33.420FT truck-tractor which goes into local production early in 2018, as well as an example of the 8.140 freight carrier which was fitted with an Allison automatic transmission, and a 33-seater bus, built by Busmark on an 8.140 chassis.

The Indian Eicher brand, part of the global Volvo Group, was launched in South Africa only two months ago with the introduction of its Pro 3000 medium range. The opportunity was taken to launch the larger Pro 6000 heavy truck range at Futuroad.

Eicher, originally a German tractor maker, founded a company in India in 1959 and built up a successful business, alter expanding to build and sell trucks and buses. It withdrew from the tractor market in 2005 to concentrate on trucks and buses. The big step forward for the brand came in 2008 when a joint venture was set up with the Volvo Group.

This has resulted sales growing significantly with 58 000 trucks and buses sold in 2016, which is more than halfway to the target of marketing and selling 100 000 units a year and exporting 10%.

Tata, the huge Indian conglomerate with extensive automotive interests, including ownership of Jaguar Land Rover, has been operating in Africa for 40 years (starting in Zambia in 1977) and in South Africa for more than 20 years.

The launch of a new medium commercial vehicle range, the Ultra, designed by the Italian styling house, Bertone, marked the arrival of an important new arrow in the brand’s quiver of models in the local truck market and the addresses by Tata executives were positive in terms of their ambition to increase market share substantially.

The big news from Powerstar is that the company has come to an arrangement with Foton to rebrand its 3-, 5- and 8-ton trucks as Powerstar models so that the brand now has a range going from medium commercial vehicles to extra-heavy truck-tractors and construction trucks. Powerstar, which was established in China in 1989, was introduced to the South African market in 2006. The expanding model range is now distributed by Ever Star Industries, which also operates an assembly plant in Pietermaritzburg, bought from Super Group in 2009.

Other truck brands displayed at Futuroad were Scania, MAN, and Volkswagen. MCV bus- and coachbuilder had an indoor stand, while a host of body builders had impressive displays in the outside exhibition areas.

Regsitration to Automechanika, Futuroad, Scalex and REIFEN is free to attend.

Visit the event at Johannesburg Expo Centre, Nasrec. Doors open from 10am-5pm on Friday 29 September and 9am-1pm on Saturday 30 September.