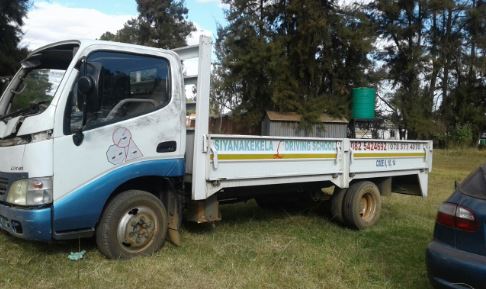 A 25-year-old man is expected to appear at the Mkobola Magistrates’ Court tomorrow, 9 July 2018, facing a possession of suspected stolen truck charge.

His appearance comes after he was arrested by members of the South African Police Service at Kwaggafontein on Friday, 02 July 2018 around 06:00, while driving a white Toyota Dyna truck allegedly stolen from Secunda.

His arrest came as members of the police who were conducting a routine operation stopped two suspicious looking vehicles, a red pick-up van driving in front and the Dyna truck at the back, along a gravel road. The police motioned to the drivers to stop but the driver of the red van in front sped off and the driver of the truck stopped, alighted and ran away. The police gave chase and managed to apprehend him.

The suspect will appear in court tomorrow facing the possession charge and is expected to appear later at Secunda facing a theft of motor vehicle charge accordingly.

The Provincial Commissioner of the police in Mpumalanga, Lieutenant General Mondli Zuma commended the members for their astuteness especially the area they were working in is problematic.