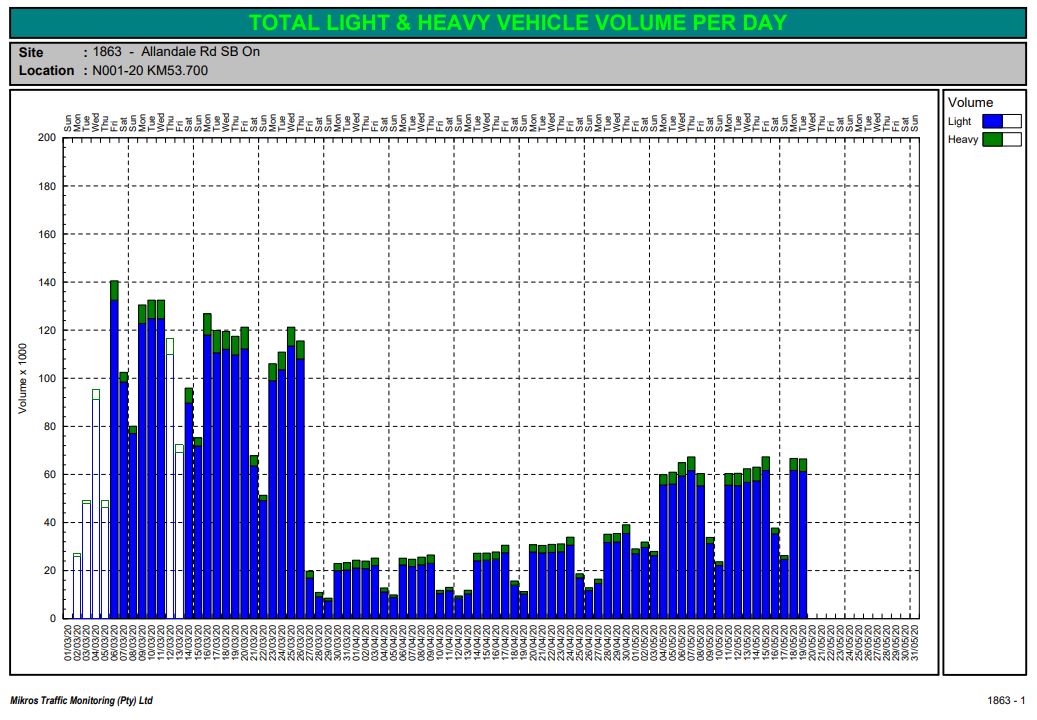 Due to movement restrictions, most South African vehicles have had little use during lockdown and this has resulted in time and money savings for their owners. Tracker’s anonymised vehicle tracking data aggregated from the company’s installed vehicle base and analytics from Lightstone indicates that on average, reduced use of passenger vehicles saved 1150km of driving, 30 hours on the road and R1350 in fuel, during the first month of lockdown. This is compared to the average kilometres driven, time spent on the road and money spent on fuel during the month prior to lockdown.

Persons who travelled more before lockdown stood to gain greater savings than those with lower mileages. On average, passenger vehicles previously travelling less than 500km per month saved four hours of time on the road and R100 in fuel, while those with a typical mileage of 1500km to 2000km per month saved 40 hours in drive time and R1800 on fuel. For further comparison, 500-1000km and 1000-1500km drivers respectively saved 20 and 30 hours on the road plus R750 and R1250 in fuel spend.

In savings of time on the road, where not only fewer trips played a role, but also the time saved getting from point A to point B due to less traffic, benefits differed across municipalities. Cape Town experienced the biggest time saving of 36 hours, followed by Johannesburg and Polokwane at 33 hours, then Tshwane, Ekurhuleni and eThekwini at 31 hours, and Rustenburg at 28 hours.

Across the country, the trend during lockdown was greater use of smaller vehicles, particularly by households with more than one vehicle. In Johannesburg, the shift was from 65% before lockdown to 70% during lockdown of travel being done in small vehicles. Durban experienced a similar shift from 66% to 70%, while Tshwane went from 58% to 62%. For Cape Town, which has the greatest use of smaller vehicles, the shift was from 71% to 73%.

“With many vehicles standing idle during lockdown it is not surprising that motorists have saved a lot of time and money during this period,” says Michael du Preez, Executive: Product and Marketing at Tracker South Africa. “Unfortunately, with travel significantly curtailed, many motorists would not have been able to take advantage of savings from the record fuel price decrease during April, which was close to R2 for petrol and more than R1 for diesel.”

“While many private individuals might not have been able to take advantage of the fuel price decrease during April, the drop might have provided some relief to a few commercial operators,” says Linda Reid, Head of Data for Lightstone. “While probably not enough to make a substantial difference to the negative economic impact of the lockdown for companies, which we are already picking up in the data, perhaps this was a little helpful in containing costs for some. Distances travelled by panel vans are down from 2350km to 750km, while distances travelled by trucks are down from 3100km to 1100km. The impact on small businesses can be clearly seen in the distances driven by bakkies, which are down from 2200km to 700km.”