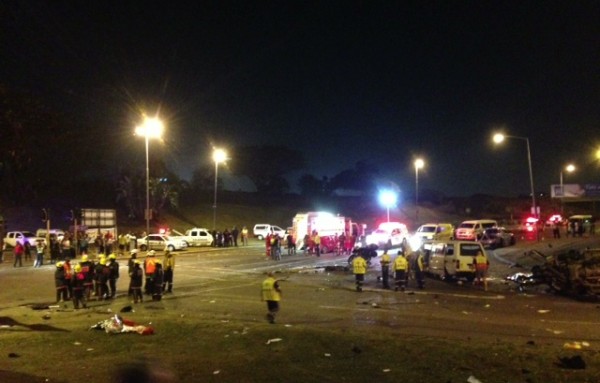 The KwaZulu-Natal MEC for Transport, Community Safety and Liaison, Mr. Mxolisi Kaunda, has noted and welcomed the bold intentions by the National Prosecuting Authority (NPA) to charge the owner of a truck company that was involved in the deadly Fields Hill (M13) accident, which killed 24 people on the 5th of September 2013.

Reports reveal that the NPA has issued a summons to Mr. Gregory Govender, who is the owner of Sagekal Logistics, to appear in court on the 13th of July 2016.

At the time of the accident, the truck was driven by Mr. Sanele May, originally from Swaziland, who pleaded guilty to charges including culpable homicide, fraud and operating a vehicle without a professional driving permit. He is currently in jail serving a sentence of eight years and 10 months. He had initially been charged with 24 cases of murder, but these were later converted to culpable homicide.

On the evening of the 5th of September 2013, during the peak hours, May’s truck ploughed into four minibus taxis and two other light motor vehicles. There were 22 people who died on the scene, with two others later losing their lives in hospital.

During the trial, forensic investigations found that the truck experienced brake failure and had many defects.

Charges against Governder have not been revealed by the NPA, however, MEC Kaunda has expressed hope that charging the truck owner will be an important lesson to all vehicles owners and will set a crucial precedent.

“We welcome the bold intentions of the National Prosecuting Authority. As government, we have always raised the issue of the truck owner having to take responsibility. Yes, the truck driver (May) is serving his time, but the owner, who allowed him to use the vehicle that was not roadworthy on our public roads, must also face the law. We are of the view that such will also ensure that the families of the victims of the Fields Hill accident are able to reach closure over this tragic accident. Charging the company owner will also be a lesson to other owners and transport operators who are busy maximising their profits at the expense of people’s lives,” said Kaunda.

He further mentioned that the Department of Transport will also be monitoring this matter very closely and will seek legal advice on its participation in this matter.

Since the Fields Hill accident, the department has introduced a number of measures to improve the safety of road users on this road – and others across the province. These include joint enforcement operations by the department’s Road Traffic Inspectorate and eThekwini Metro, restriction of heavy vehicles during peak hours and installation of clear signage.

MEC Kaunda has vowed that such a painful accident should not happen again in the province, and commits the department in working with all stakeholders to reduce the scourge of road crashes and fatalities.