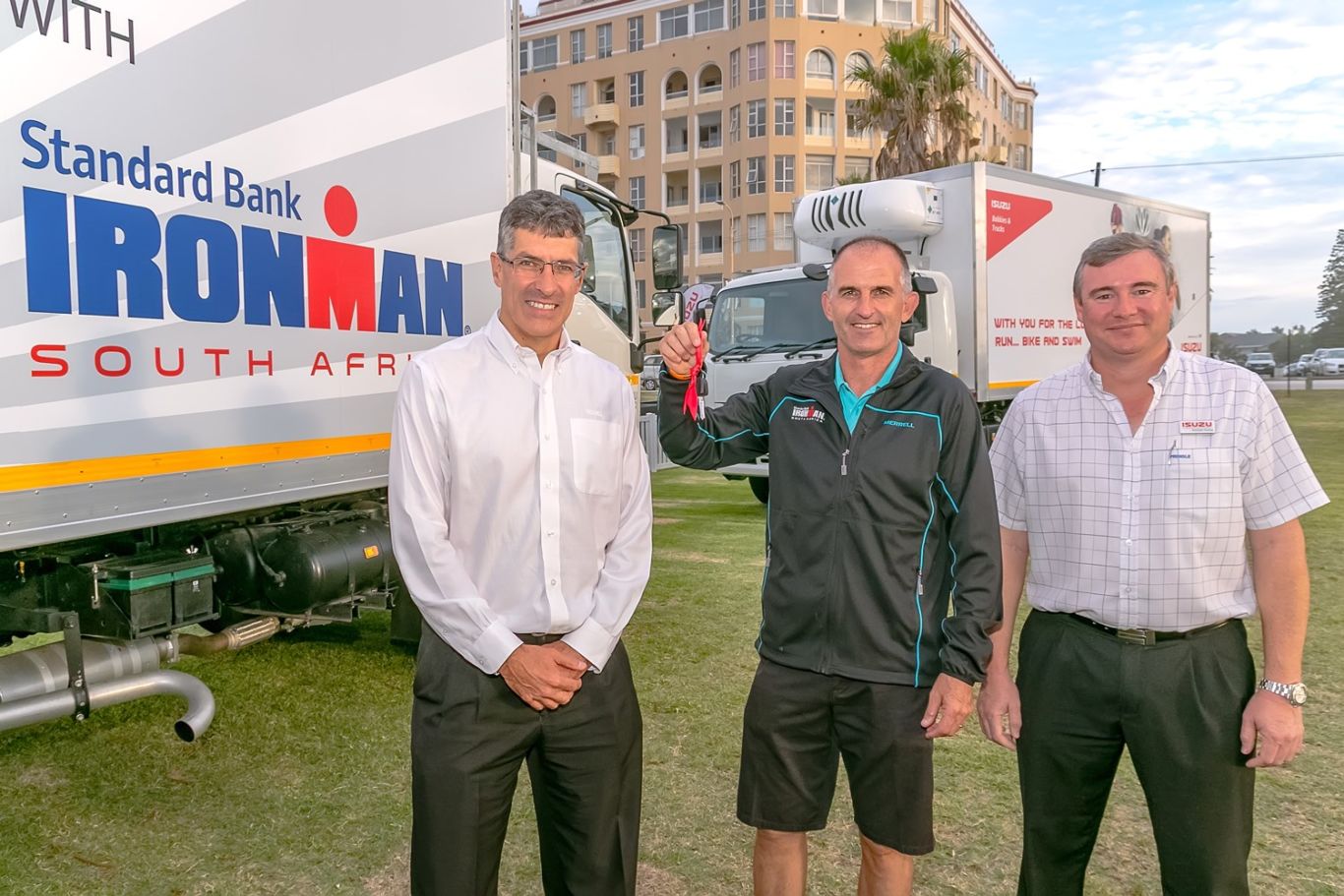 ISUZU will fulfil a critical logistical role at this weekend’s triathlon events taking place along the scenic Port Elizabeth coastline.

This is in addition to Isuzu being the title sponsor of the Isuzu Corporate Triathlon Challenge, the biggest triathlon event outside of the IRONMAN series in South Africa – with a total of 1 650 individual athletes expected to participate on Saturday, 14 April.

Handing over eight refrigerated 8-ton Isuzu trucks to the race organisers last night [Thursday, 12 April], Isuzu affirmed its longstanding partnership with the triathlon organisers, which started over eight years ago.

Craig Uren, Isuzu Motors South Africa, Executive Officer Sales, Service and Marketing, said the Isuzu brand is synonymous with endurance, durability and reliability, very much the same as IRONMAN. “We are committed to provide solutions to the triathlon and to ensure the athletes are efficiently hydrated at the same time.”

The refrigerated Isuzu trucks will be used for both the Isuzu Corporate Triathlon Challenge, as well as the Standard Bank IRONMAN African Championship this weekend.

In addition to the eight trucks that will be stationed at eight water points during the weekend, another two Isuzu trucks and eight Isuzu bakkies will be used during the weekend for various transportation and logistical purposes.

“The partnership with Isuzu Motors South Africa is invaluable – it takes so much pressure off us to make use of the bakkies and the trucks. No other host in the world has a sponsorship like this,” said IRONMAN Africa’s Director of Operations, Paul Wolff.

“There is a lot of logistics involved during this weekend – with three sports in one event, and the different events hosted on Saturday and Sunday. Branding and infrastructure must be moved and stored – everything has a logistical component. The refrigerated trucks will add so much value to the event, by offering a cold product to the participants,” Wolff said.

The Isuzu bakkies and trucks also formed a critical component of the construction of the impressive Ironman set-up at the beachfront, including an Ironman Village, as well as assisting with the road closures, transporting volunteers, athletes and media during the weekend.

“No event can survive without partners, and we are very grateful to Isuzu. The company is not just a sponsor but a partner,” Wolff said.

Isuzu Truck Centre Port Elizabeth Dealer Principal, Duncan Young, said the partnership with the triathlon events, is a good fit for Isuzu tagline, “With you for the long run”, since the vehicles are reliable and the perfect fit for endurance events of this nature.