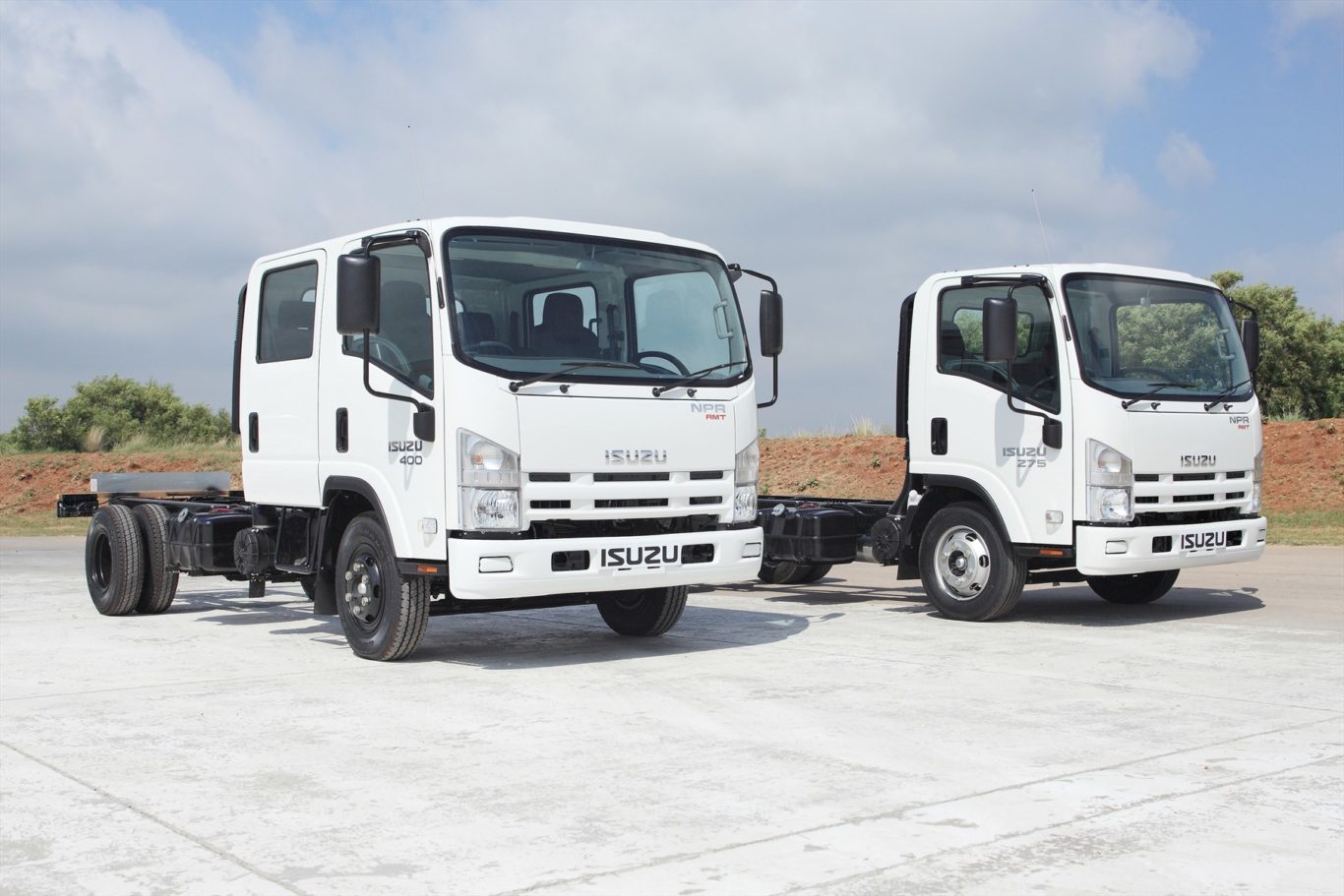 Isuzu Motors South Africa holds the position of South Africa’s best-selling truck brand in the Medium Commercial and Heavy Commercial Vehicle segment for the past six years. Isuzu offers the widest range of truck models in this market segment and is the leading brand for chassis/cab applications for application of a cargo body suited to the payload and task.

The N-Series range is classed as, and sells into the medium truck market, where a gross vehicle mass (GVM) applies of 3,5-ton up to 8,5-ton GVM. The range offers a comprehensive medium truck range of 28 models ranging from 4,200kg all the way up to 8,500kg GVM. This in turn equates to payloads from around 1,5 ton up to around 4,5-ton dependent on cargo body mass.

Trucks are selected for transport tasks according to a matching gross vehicle mass (GVM) – specifically, one size does not fit all. As GVM includes payload and body mass, it is the critical factor in truck selection and finally vehicle price.

The cab design that has achieved this success is a forward-control cab and which utilises common components, such as doors, between Isuzu N & F-Series models. Isuzu forward-control cabs incorporate many advantages that both drivers and fleet owners appreciate –

The modern, high-tech, Isuzu N & F-Series cab design has been improved even further in line with the Japanese philosophy of Kaizen – continuous entrenched improvement.

The driver’s seat takes a severe beating in distribution operations – this especially for Isuzu N-Series models such as bakery van fleets with multitudes of stops-and-drops. The N-Series range now comes fitted with a standard heavy-duty driver seat.
The entire N & F-Series range is now equipped with a key-operated central-locking. system. This in turn gives the driver enhanced control over security and passenger safety, including a reduction in the threat of easy access leading to hijacking.
Along with central locking, every Isuzu N & F-Series model is also now equipped with another security feature – power windows.
Top of the range N & F-Series models equipped with Automated Manual Transmissions (AMT) will also be fitted with a 24V radio and speaker system, including a CD player, Bluetooth connectivity and USB port.
Isuzu N & F-Series crew cabs lead the way in complying with RTA Regulations

The 13th Amendment to the National Road Traffic Act (RTA) published in Government Gazette 29865 – 4 May 2007 – carried changes to Regulation 247. There’s no restriction on the number of persons that may be carried on the back of a goods vehicle but now it must be empty of tools or goods – apart from personal effects – unless they are separated by a partition. This is where Isuzu has established a leadership role and being the first in offering standard crew-cab models for both medium and heavy-duty 4 X 2 trucks.

N-Series offers seven crew cab models – three at 5200kg GVM, two at 6200kg GVM (including one 4 X 4 model) and two at 7500kg GVM
F-Series offers three crew cab models – all three at 13,500kg GVM which includes one Automated Manual Transmission (AMT) model and one 4 X 4 model
Isuzu crew cabs carry up to seven passengers including the driver and all in individual seat-belted safety. Isuzu has become the municipal standard for transporting people on goods vehicles.

At the start of 2019 Isuzu N & F-Series had sold a cumulative total since initial launch of 3,057 crew cabs, split into 2,601 x N-Series and 456 x F-Series – this represents top-line success for transporting crews in safety and in compliance with the RTA Regulations.

Isuzu N-Series were the first trucks on the South African market to introduce an Automated Manual Transmission (AMT) in 2008. The AMT was designated as ‘Smoother AMT’ at launch into the medium and heavy truck market. Isuzu F-Series was launched with AMT in April 2010.

A seamless Isuzu AMT gear-shift turns an average driver into a good driver. This allows a driver to focus safely with two-pedal control on ever-changing road conditions in heavy traffic. AMT synchronises with engine technologies to further improve fuel consumption through automatic gear selection. Eliminating clutch replacement also reduces downtime and total lifetime ownership costs. It also means increased safety for driver and crew. The AMT also incorporates a manual shift which can be used from time to time according to road conditions.

Independently operated dual-circuit braking systems – should one circuit fail the other still operates to stop the vehicle
A standard exhaust brake across the range – by shutting off the engine fuel supply and inserting a valve into the exhaust system, extra retardation is developed in the driveline without touching the footbrakes for maximum braking efficiency
ABS – Anti-lock Braking Systems prevent wheel lock-up under emergency braking conditions. ABS is also now standard across all N & F-Series 4 X 4 models
Isuzu trucks are tested to M3 brake standards as a norm
Every Isuzu cab is designed with floor stiffener sections to reduce deformation in the event of frontal collision.

Exceptional off-road traction capability on N & F-Series comes from an additional low-range gear-set in the drive train including a limited-slip differential in the rear axle – this operates automatically should one of the rear drive wheels begin to slip without driver intervention.

Focus on the specialised needs of waste collection and refuse management has resulted in 26,000kg GVM refuse compactors for the F-Series, with both manual and automatic transmissions. An Allison automatic transmission model is ideal for difficult stop-start operations while a lockable third differential on both models provides extra traction in severe underfoot conditions at waste sites.

The entire Isuzu N & F-Series ranges are equipped with common rail, turbo-intercooled, in-line diesel engines that are compliant with SA’s current Euro 2 exhaust emission regulations. This means no power loss at any altitude on Isuzu engines – whether operating in the Lesotho highlands at 3,000 metres or at the coast, Isuzu diesel power delivers maximum torque (Nm) and kilowatts (kW) for the task.

Powertrain capacity does not end at GVM – the entire Isuzu N & F-Series are designed to offer a useful trailer capacity in terms of Gross Combination Mass (GCM). A useful GCM is the outcome of an efficiently engineered powertrain which in the case of the F-Series tops out at 36,000kg.

All Isuzu Trucks comes standard with a 2-year/unlimited km warranty and many N & F-Series models cover as much as 200,000km in the warranty period with only 10 service days off the road. Isuzu Trucks enjoy a big existing brand population that makes all 37 Isuzu truck dealers viable in terms of parts and service. The current success and volumes of N & F-Series is enhancing parts and service success, an essential component of sustainability in the truck market.