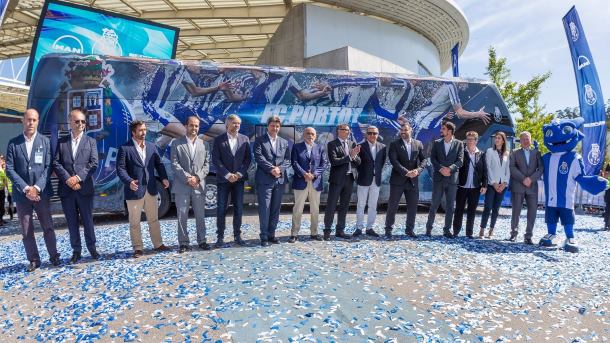 The MAN Bus Modification Center has fitted out the new team bus for the FC Porto soccer team. In the NEOPLAN Skyliner, the talented players and team can not only travel to their matches in comfort but also relax before and after the matches.

With a big show in front of thousands of football fans, the FC Porto welcomed its new team bus. The first match of the new season delivered the perfect surrounding for handing over the well-equipped NEOPLAN Skyliner to the players, who will travel to future matches as comfortable as possible.

From the outside, the double-decker bus looks just like a perfectly normal NEOPLAN Skyliner, with the exception of the LED lighting around the edges. Appearances can be deceiving, as you discover when you step inside the latest addition to FC Porto team main team technical team: on the lower deck, a state of the art kitchen provides a pleasant cosiness during the journey, while the galley and its ceramic hob, as well as a fridge freezer, offer the very best catering facilities. The do-a-dos tables allow comfortable meetings for the coaches, technical staff, and players.

The special features on the upper deck are even more obvious: anyone who climbs the stairs of the double-decker bus will find themselves amongst the top of the range individual seats mounted on each side for the players, allowing up to 20 players to rest comfortably with plenty of space.

The integrated hi-fi equipment and multimedia system with various monitors create the appropriate atmosphere on board. It goes without saying that power sockets next to all seats are indispensable, as are refrigerators on the upper and lower decks. A dual-zone rear air conditioning system that can regulate the upper and lower decks individually, a convector heater and two step unit heaters all maintain the perfect climate while on the road.  Once at the matches, this task is assumed by a stationary air conditioning system with an electric air conditioning compressor in the luggage compartment.

To ensure the highest safety on the road while travelling, the bus is equipped with the latest and state of the art assistance systems, including emergency braking assistance (EBA), adaptive cruise control (ACC) and a lane guard system (LGS), not to mention the electronically controlled shock absorbers of the MAN ComfortDriveSuspension (CDS). These all make sure that this very special double-decker is perfectly equipped for its tours throughout Europe.

Together with all this equipment to ensure a fast and smooth traveling the bus depends on a powerful and environmentally friendly engine that complies with the latest legal requirements of Euro 6. The 6 cylinder Common-Rail Diesel Engine with 12.5 liters and 500 hp, ensures that any road is easily traveled, together with the engine there is an automatic gearbox with topographic cruise control to make the work of the driver also relaxing.

The team is just as extraordinary as the bus itself. The FC Porto team will use this NEOPLAN Skyliner to transport the main team for all matches.