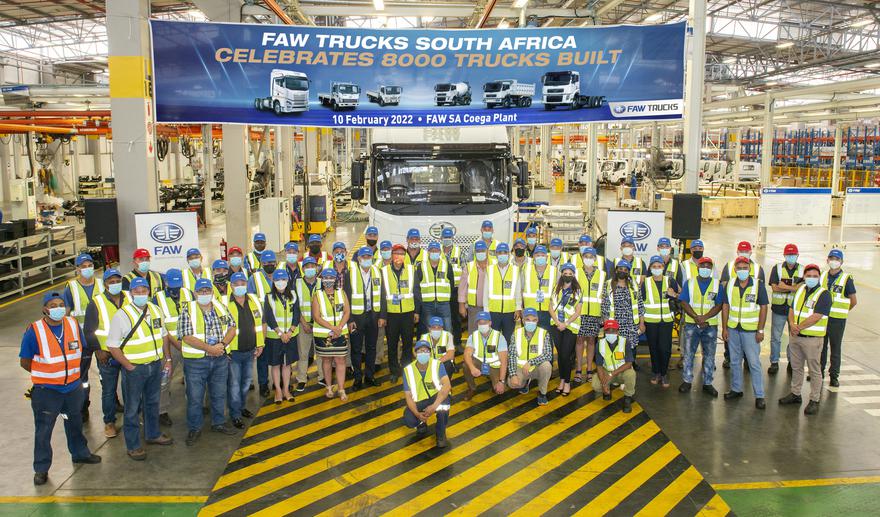 On 9 February 2022 FAW Trucks celebrated another major milestone in its local history as the 8 000th locally assembled unit rolled out of its Coega manufacturing plant, just short of eight years after the production trial period commenced in May 2014.

Says Yongjun Li, CEO of FAW Trucks SA: “The assembly of our 8 000th unit is an understandably proud moment for us, especially as it comes on the back of the introduction of yet another new model derivative.

“Since first entering the South African market 28 years ago, we have gone from strength to strength, providing local buyers with products of high quality that is not only well suited to local conditions but also boast high levels of safety, convenience, and comfort. We have managed to combine this with competitive pricing, low running costs and continuously improving aftersales service.”

FAW Trucks took the top spot in the Heavy Commercial Vehicle (HCV) segment of the local market for the first time in the first quarter of 2021 and continues to maintain its strong sales performance in a highly competitive environment. This success can largely be attributed to a dedicated and strategically located dealer network, a reliable and consistent parts supply, and a continuing expansion of product offerings.

Funded by the China FAW Group Corporation and the China-Africa Development Fund, the Coega facility was built at a cost of R600 million and spans some 30 000m². Under the watchful eye of plant manager, Peng Lei,148 people are employed in the Production, Technical & Quality, Operations & Supply Chain, Finance, and Human Resources Departments.

“If all goes according to plan, we are confident that we will assemble the 10 000th unit in December this year,” he explains.

All units arrive in South Africa in completely knocked-down form and are then assembled at Coega.

“The reason for our continued growth in South Africa is the fact that we cater to virtually every need,” explains Li. “Our line-up includes freight carriers, truck tractors, tippers, and mixers, all assembled to exacting standards to be able to withstand the harsh conditions of the African continent.

“All current models in the local FAW Trucks range represent the strength, reliability, affordability, and ease of operation that the brand and its products are renowned for. This means that every unit that leaves the Coega facility truly is ‘Built in South Africa, for Africa’,” Li concludes.