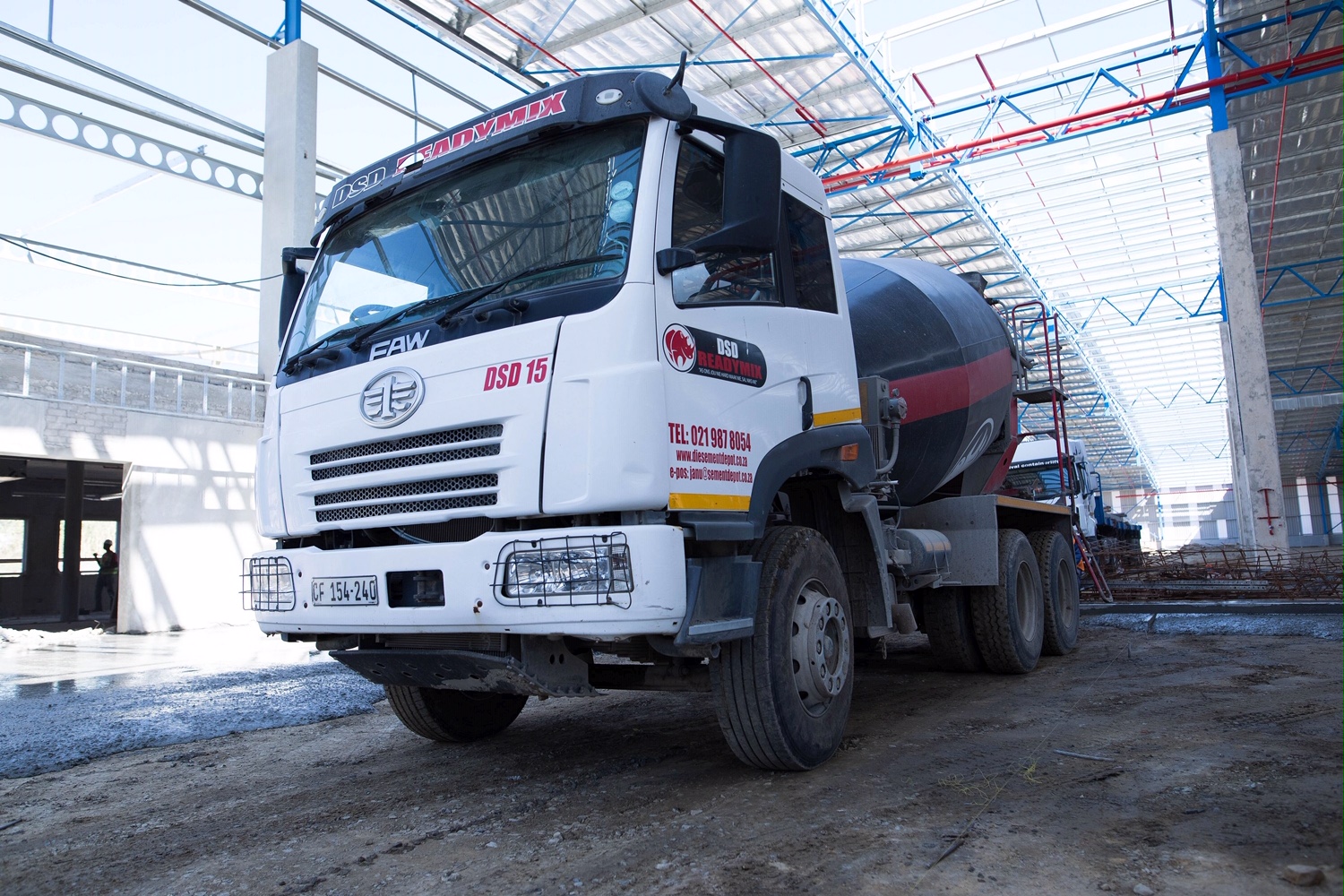 The Cape Town-based company sell import cement from Vietnam and supplies ready-mix concrete, sand and stone to its clients throughout the Western Cape.

Its ready-mix concrete products are distributed through depots in Killarney, Kraaifontein and Faure, and it also delivers high-quality cement to its customers in the province as required.

Andre Mostert, group CEO of the AMV Group, says DSD is the fastest-growing ready-mix concrete supplier in Cape Town, buying over 90 trucks in the last five years. He adds that he has plans to expand the company into Durban and Saldanha Bay, where more trucks will be required.

“I had no trust initially in FAW,” Mostert concedes. “But the trucks have stood the test of time. They are fuel-efficient and durable. And the changes that have been made to the FAW range, particularly the fitment of ZF transmissions, helped to change my mind,” he explains.

In total, the DSD Group – of which Die Sement Depot is just one part – operates 26 FAW ready-mix trucks and will likely increase this to 30 in the near future.

The Group initially bought two FAW mixer trucks – a FAW 35.340FC and a FAW 33.330FC from the FAW Cape Town branch. These two trucks were already fitted with 8m3 and 6m3 mixing drums respectively, with FAW the only truck supplier in the city that could provide this convenience to DSD. “We picked up complete trucks to the specs that we required,” says Mostert.

Affordability was also a key factor. “FAW trucks are almost half the price of their premium competitors. Finance was obtained easily as well because FAW looked at our business differently. They took the risk that other truck brands weren’t willing to take on us. We see them as good business partners.”

He says he appreciates the fact that FAW Cape Town has highly experienced sales staff. “Dealing with Colin Buckley and dealer principal, Vernon Rudman, has been a good experience. They go the extra mile. It takes one call to sort things out when we have issues and we can have trucks on the road in two weeks from the date of order,” he says.

“FAW is the superior truck in my fleet. In fact, we haven’t replaced a single FAW in five years,” he notes.

All the company’s FAW tippers, which include 10m3, 15m3 and 18m3 units, look the same, which Mostert acknowledges helps the company enforce its branding and corporate identity in the region.

From technical and vehicle specification points-of-view, knowing what works and what doesn’t in different South African construction industry-specific environments is important to Mostert’s company. This know-how lead to small changes being made to the FAW trucks at production level.

“Certain aspects, like the air filter design, were changed on our FAW trucks in China. This was done happily by FAW at our request, to suit our unique operations,” Mostert explains.

Mostert says FAW’s relationship with local tipper body suppliers is also advantageous, as it means that suitable, road-ready trucks can be supplied to his companies much faster than would otherwise be the case.

“FAW is a flexible company whose decisions are not set in stone. We see FAW as a fair-value brand and the only truck that is affordable in these tough economic times,” he concludes.