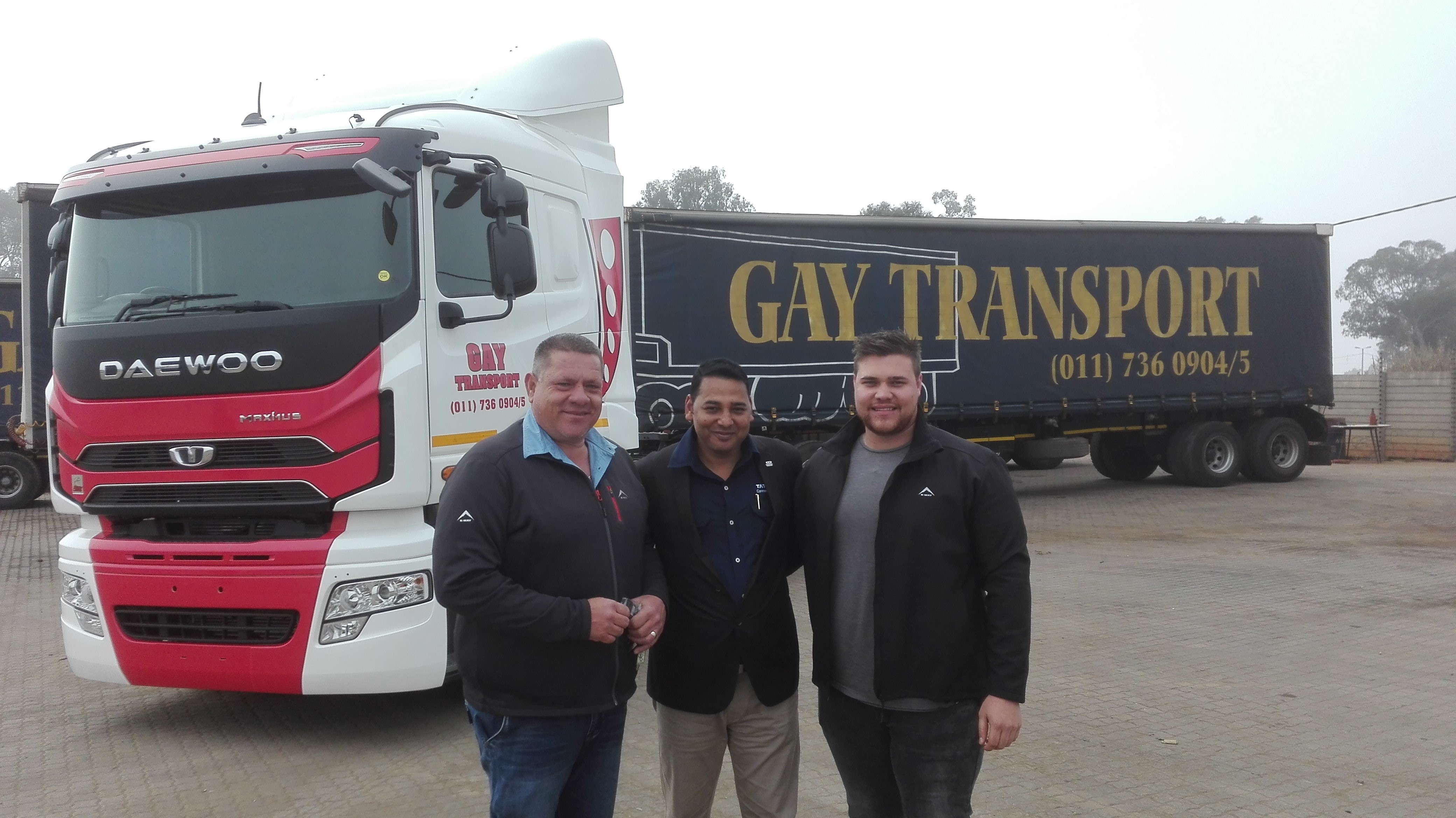 Following a downsizing process to become even more efficient, Gay Transport was in a position earlier this year to acquire new trucks. The family business is currently managed – with distinction – by Jacques Botha, who took over the reins from his father Ben.

It was important to Jacques that the new vehicles he acquired matched the company’s efficient, productive business philosophy, which explains why Gay Transport took delivery of its first two Daewoo Maximus trucks in March of this year.

Both trucks were subsequently put through a testing phase and, having passed the company’s evaluation period with aplomb, two more Daewoo Maximus 6×4 truck tractors were added to the company’s mixed fleet in June.

Reflecting on the decision to buy the four Daewoo trucks, Jacques explains that his quest for efficiency and cost containment led him to Daewoo Trucks, whose vehicles are specced with Cummins engines and either Eaton or ZF gearboxes – brands that his company has solid working experience with and sound knowledge of.

He chose Eaton, which he says enables excellent fuel consumption and, combined with the Cummins engine, the highest possible average speeds. These are operating requirements that tie in perfectly with the prioritised uptime philosophy of Daewoo Trucks, which is backed up by an excellent warranty, service plan and customer service.

Today his Daewoo trucks are used to deliver various loads to Cape Town, Durban and Tzaneen, as well as cross-border into eSwatini and Lesotho. With service intervals of 30 000km, the first two Daewoo trucks in his fleet have already completed their first minor services.

“The fuel consumption on these trucks is great, we run at about 2.25l/km at this stage pulling tautliner trailers across the country,” he says. “The next best thing is the 24-volt electrical system, which is a significant upgrade over the 12-volt systems used with this engine by other truck brands. I can’t see there being any problems with this anymore.”

The 14.9-litre Cummins engine used in the Maximus is both powerful and reliable. “Long hills are ascended comfortably, meaning our average speeds are superior. My drivers complain because the trucks as per government regulation are governed to 80km/h,” he jokes.

Jacques adds that by using a European style cab, the Daewoo driving experience is also a noteworthy characteristic. “These types of cabs are comfortable, and our drivers know them well. They know where the torque from the engine is. We haven’t had to use any breakdown services yet, but I must say the Daewoo service department is right up there with the best in the industry.”

Daewoo Assist, a 24/7 call centre is in place to assist with any issues that might arise on the road and parts are always available from the dedicated Daewoo parts facility. In fact, there are 91 touch points dedicated to serving the brand throughout the country.

A factor that really impressed him was the way Daewoo Trucks asked that his technicians attend a two-day familiarisation course before the new trucks arrived. “When we got the vehicles, the technicians knew exactly where to tilt the cab and so on. That was something significant for me because normally you take delivery of a truck and then the training takes place afterwards.

“The maintenance contracts are also highly impressive, right up to 600 000km. This is fantastic for our operating costs and is superior to the industry norm of 500 000km. Everything is included, there are no hidden costs. These days in transport if you can have set costings, you can manage a good business,” he argues.

Jacques says that he first saw the Daewoo Maximus vehicles three years ago at a local truck show. Willie Froneman (product sales manager at Daewoo Trucks South Africa) later phoned him and explained the driveline and pricing to him. “The purchase price is very competitive for the truck you are buying,” continues Jacques. “You get a lot of truck for the money. In fact, you get the total package,” he clarifies.

Being part of the Tata Group is another positive in Jacques view. “Tata has been handling everything in South Africa for a number of years. We talk a lot to people in the transport industry who are using Tata tippers. The backup is there. For us, the main thing is backup. If you consider the association Daewoo Trucks has with Tata and the excellent engine and gearbox in the Maximus, you realise Daewoo Trucks have ticked all the boxes with this truck tractor.

Since Gay Transport was established in 1965, the Botha family has been totally focused on developing a company with exceptional ethics. With more than 50 years of experience in the transport industry, the company is well recognised not only across South Africa but also in neighbouring Botswana, eSwatini and Lesotho.

Jacques has always prioritised professionalism and its little wonder that the company recently achieved RTMS (Road Transport Management System) certification. He says it will take some time before the full benefits of RTMS certification are realised. “We work with leading companies that are used to us doing everything professionally. It’s just that we weren’t officially RTMS,” he adds.

Jacques explains that getting everything documented for certification was a bigger challenge than anything else. “RTMS helps us at the borders and weighbridges and, in the years to come, the fly-by-night operators out there will continue to disappear.”

Gay Transport does a lot of work for Distell as well as for groups that are involved in timber exports where compliance requirements are stringent. “You can’t cross into another country if everything is not in order,” Jacques states.

He has also recently overseen a number of improvements to the company’s yard in Witpoort Estates, Brakpan. Not only is the yard more spacious now, but it is also more accessible to the trucks that visit it regularly. “Our customers need clean trailers, inside and out,” Jacques explains. “At least now we can get to them easily and make sure they are always pristine.”

Turning his attention back to Daewoo Trucks in South Africa he concludes: “We are definitely going to buy more Daewoo Maximus trucks. We will also replace a few of them next year, depending on the number of kilometres they’ve been driven. I think Daewoo Trucks has a bright future in this country. They have a good truck on the road. So far, so good. I’m very happy.”