A priority for most fleet managers is ensuring their drivers maintain concentration on the road at all times by impressing the danger of driving while distracted (DWD) on them. A poignant example of the danger of DWD is statistics released in USA in 2020. Distracted driving was responsible for 8.1% of all fatalities that year which is 0.7% increase from 2019. What makes these statistics concerning is that this happened during lockdown, when there were far less vehicles on the road.

Continuing to raise awareness about DWD throughout the year should be a priority along with finding new ways to reduce it. The CEO of MasterDrive, Eugene Herbert, explains further: “MasterDrive advocates many ways of doing this, from awareness campaigns that clearly illustrate the danger to implementing technology that makes it difficult for drivers to even consider using a phone whilst driving. International research is now also suggesting there may be another way to reduce DWD that many may not have considered before.

“Statistics from USA say driver training is not only an effective means of decreasing crashes but also of decreasing the chance drivers will commit violations. Trained fleets have 25% less violations per month than fleets that do not undergo training. The research suggests that training, such as distracted driving courses, have potential to substantially reduce your organisations risk of DWD crashes.”

Can South Africa see the same effect should a similar attitude towards training and DWD arise in the country? “Statistically, it’s difficult to say without the relevant data to assist the analysis but from the perspective of an organisation with extensive experience in how training motivates better driving behaviour, it might very well be another effective means to curb DWD.

“In current defensive driver training, it is important to remember a great deal of change is motivated by greater understanding. Drivers know it’s dangerous to speed but in most instances will often commit the violation anyway because there is a lack of the full understanding of the consequences. Those that have undergone training understand what the difference will be when you hit an object at 60km/h versus hitting it at 80km/h. Comprehending this difference is often enough to motivate one to think twice about even committing the violation.”

An intensive anti-DWD training course, therefore, could have potential in the fight against DWD. “Thinking of the well-known adage, prevention is better than cure, commit yourself to helping drivers understand the risks they expose both themselves and their organisations to. The buy-in to avoid DWD may be much higher. Combine this with current awareness campaigns, the use of technology that makes distracted driving near impossible and you might find your organisation has a lot more power to change this habit than you ever believed possible,” says Herbert. 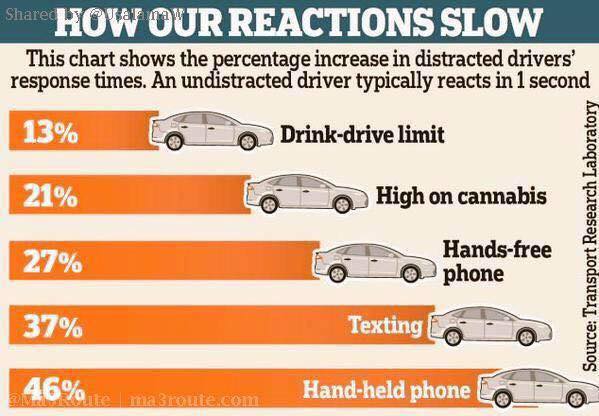