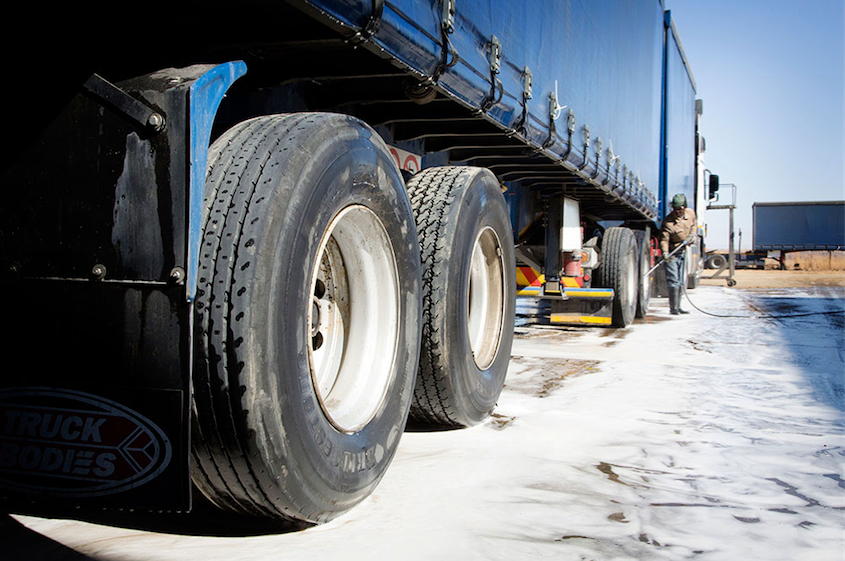 The Arrive Alive website received a rather insightful email detailing some of the challenges facing truck drivers on our roads! We would like to share this with our readers:

“I started my driving career in 1989 whilst in College the Railways at the time was having a strike and they needed guys to drive the trucks with the PX containers. They were old Leyland automatics. I was the drivers assistant and we travelled in and around Durban delivering goods. There were occasions when the Driver never pitched up and I drove his truck.

I got called to do Military service and was once again in the trucks 1SSB Bloemfontein. After leaving the military I want to pursue my career in Electronics got a job doing radio and TV repairs and installing satellite dishes for a no of years. I got bored with this and a mate and I developed a rust prevention device which would slow down the rusting process quite dramatically. The Toyota came out with a fantastic paint which killed our business. My partner and I parted ways and he got involved in something completely different. I was in a state of shock as I saw my world crumble before me.

The at the age of 26 I had to move back home and was not a happy camper. Mother’s boyfriend was in the tow truck industry and he allowed me to work for him as a truck drivers assistant. After 18 months of this I decided I could make more money if I just got my code 14, which I did.

I started driving all the small trucks first like the 4 ton rollback then the 8ton Hino KR and eventually graduating onto the PAYSTAR 5000. The was a monster of a truck. Things soured after while there and I started work for AUTONET which was owned by the Railways. The gave me an Interlink to drive with 28 tons of sugar from Noordsburg to the Harbour. It was only a short-term contract but I was able to make a lot of money. Moving on I joined the SPAR GROUP where they had me driving from Phoenix to Piet Retief every second night. I enjoyed the work and it was a great company to work for. After 5 years there I decided I needed some more new challenges.

I found work in the Republic of Ireland driving from the Factory to pig farmers delivering industrial yeast. I spent three years there and then decided to come home. HFR was the next company I worked for. They only had long distance and I noticed the many differences between here in South Africa and in Europe how different the truckers are treated. Over there you are respected. Over here you are like the worst thing that ever existed. I began to notice more and more of these differences and how much easier life was in Ireland.

I did this job for HFR also for three years then got in the fuel industry in Cato Ridge and later a company in JHB where I was driving ridiculous hours and they would not provide their drivers with money for the truck stops. They told us we need to be able to drive the distance or find other jobs. This is a fuel tanker I was driving with 44000 liters of petrol. As it was not safe to sleep alongside the road due to hi-jackings and equipment that was stolen off your vehicles I would try to park in the town.

One night after being caught in a traffic jam on the N3 going to JHB just before climbing van Reens pass we were delayed for 6 and a half hours. It was already late I was starting to nod off but once they cleared the road the RTI called us to move our trucks. I proceeded to Harrismith only to find the truck stop fill to capacity. I had not other choice but to park this truck carrying 44.000 liters of petrol in the town. I was not there half an hour when the Harrismith traffic cops came round to tell me that they are in pounding my vehicle. It cost me R5000.00 to get it out the inpound.

My trip every day from JHB started at Midnight I would arrive in DBN at 8am load the truck by 9am and would be back in JHB that same day at 4pm. It is a 1468kms trip every day.

After 5 years of this I found myself a job in the United States and Boy oh boy, I felt like Royalty. These guys could not do enough to make sure their truckers were looked after.

IN South Africa buying cooked food on the road is hellishly expensive and the choices are so limited. IIt’seither pie chips and gravy or Hamburger and chips or PAP en VLEIS. This is your choice three times a day on the N3 between JHB and DBN. Its fine for holiday makers but its get a bit much by the end of the week. And GOD FORBID you stop in the town to buy groceries like all other normally people. NOOOOOOOO! We are only allowed to buy service station food. Total disregard and lack of respect for the men and woman who are the back bone of any economy. I was fined in Harrismith for buying my own uncooked food R3000.00 parking fine.

When I compare the working and living conditions to our American and European counterparts it’s a wonder how the whole system has not collapsed yet? MAYBE ITS STILL COMING.

IN the USA and Europe they have rest areas and public toilets for members of the public that means truckers as well. And You don’t need to pay to stop there over night or on your rest break. They also have vending machines should you wish to buy a snack.

The working hours there are strictly monitored unlike here. The USA in all states you may not be on duty for more the 14 hours per day. Out of that you are only allowed to drive for 11 of those hours and not consecutively. The longest consecutive driving hours may not exceed 8 hours. and You have to have your 3 hours breaks in that on duty time and then you are off for the rest of the day. The USA move 9,3 Billion tons by road every year. After 60 hours of working you have take a 34 hour restart. this just gives the drivers a bit of recovery time. The best part is that if you are an owner driver and have one truck 10 trucks or 1000 trucks they pay you the same rates that every one else gets. So the only way to make sure you earn better money than your buddies is to provide reliable regular on time deliveries and you are still able to have  a good family life. WE in South Africa can learn so much. Look at the state of our road. I think it would be far better to  have goods railed to the main city and the most the drivers could be home every night also.

So now when you hear a truck driver has had an accident, please do me a favour see when it was that he last rested. After all, nearly every truck has to have tracking.

In Closing, I had an incident where the power steering unit on my truck was faulty. I informed my employer and the workshop forman at Volvo. My Boss said just sign for the vehicle and hurry up and go load. I ask the workshop manager what could happen if it was not fixeed and basically he told me I could crash and kill either myself or myself and a whole lot of other people. It was R8000.00 for a new power steering unit. Volvo insisted I sign an indemnity form to excuse them from further law suits. The right thing to do her would have been to report it to the RTI and the minute I took the truck out the gate take it straight to the weigh bridge and remove the license and operators card. This way people will begin to get serious as to the safety and maintainence of their vehicles.

On the note, I hope all this helps. maybe when doing road blocks dont punish the drivers many times we load in areas where there are no weigh bridges. We can not guess what the customers are loading on the truck.

Tags: Insights from a truck driver