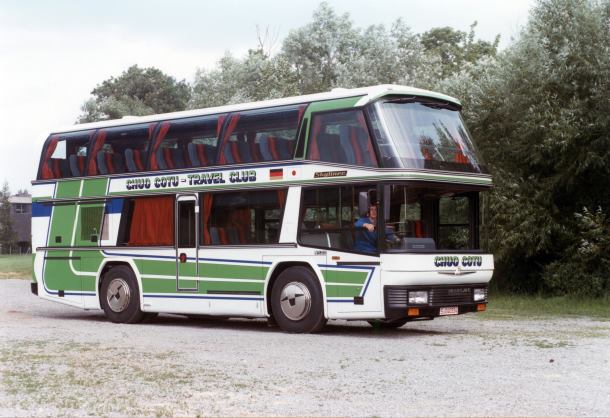 The NEOPLAN Skyliner can lay claim to several superlatives. It was not only the world’s first double-decker coach but also the shortest. In Japan, a 9m-long variant enjoys great success.

Since being introduced 50 years ago, the NEOPLAN Skyliner has been the epitome of convenient travel. Countless businesses all around the world remain delighted with its design, equipment, and features. If nothing else, due to the image boost from having a fleet with one or more double-deckers. Even in the Far East.

Only ten years after the NEOPLAN Skyliner made its début, it brought its strong reputation all the way to Japan. In 1978, a Japanese bus operator got in touch with NEOPLAN, hoping to order some of the double-decker touring coaches. Albrecht Auwärter, the enterprising businessman as he was, immediately contacted the Japanese authorities to clarify the conditions for imports to the Japanese market. The specifications were strict, requiring a maximum height of 3.80m, two emergency exit doors, conversion to left-hand drive, plus much more. But that did not stop Auwärter. That same year, the first Skyliner for the Far East was operational and driven to the North German seaport of Bremerhaven. From there, it was shipped to Japan and handed over to the customer.

Passengers and operators alike were delighted with its modern design, outstanding road holding, and comfort. However, since both countries focus so boldly on pursuing efficiency, there were soon ideas for further improvements. Although the first vehicles were shipped over with their original European engines, Auwärter later offered installation of Japanese makes. That simplified servicing, as any commercial vehicle workshop, could perform maintenance on a domestic commercial vehicle engine. The NEOPLAN Skyliner was now a perfect symbiosis between modern German coach engineering and Japanese mass production technology. Sales grew also. The buyer of the initial coaches became an importer and the sole agent of NEOPLAN vehicles in Japan.

Yet Albrecht Auwärter saw the potential for further optimisation. On a trip to Japan in 1984, he discovered that no permits were required for buses or coaches up to 9m in length. There was already the Clubliner N 122/2 in Germany, a two-axle vehicle measuring 10.7m in length. It’s lounge on the lower deck impressed as a statement of exclusive quality and enjoyed great popularity among German tour operators. The conversion started based on this. The lower-deck lounge gave way to regular seating and the first 9m-long NEOPLAN Skyliner was finished only around three months later. The shortest double-decker touring coach in the world was born. From there, a series of 50 of these vehicles were built for Japan.

Since then, NEOPLAN buses have been a success on the Japanese market. For instance, J.R. Bus Kanto, the operator of Japan Railways, ordered six more Skyliners and Megaliners in 2002, aiming to provide a luxurious alternative to rail and air travel for Japanese business people commuting between large cities like Tokyo, Tsukuba and Osaka. Then NEOPLAN tested the market’s limits once more. Special approval was necessary for the coaches that were 15 meters long because the maximum length permitted in Japan at that time was 12 metres. But Albrecht Auwärter and NEOPLAN have always known how to make a convincing case.