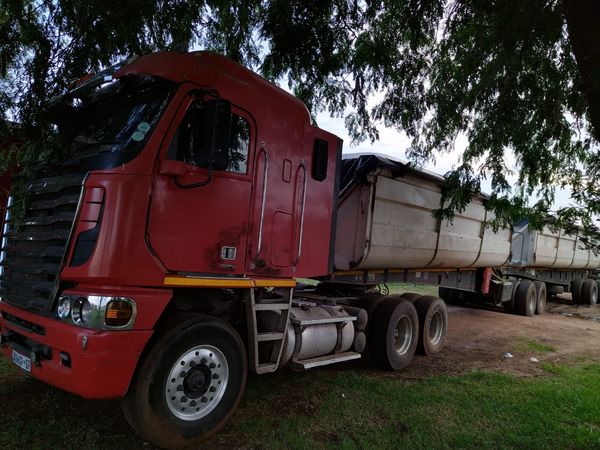 The Provincial Commissioner of the SAPS in Mpumalanga Lieutenant General Semakaleng Daphney Manamela has vowed to continue intensifying her efforts in tackling hijackings, especially in areas where it is a real problem. Her efforts were seen after two suspects, aged 24 and 27 were arrested respectively in Delmas where they are expected to appear in court soon. Two trucks as well as a Toyota double cab GD 6 bakkie were recovered by the astute members in the same area of Delmas.

It is said that on 03 February 2022 at about 19h45 the victim was loading soya at Ceoco Central in Delmas with Freightliner truck as well as two trailers. As he was driving out, he was approached by several vehicles blocking the road. Three armed males approached him and forced him into the back of the truck and covered his head. The suspects drove around with him. Later he was forced into a white minibus. At some stage, they placed him at a certain house and kept him there. During that time, a good Samaritan informed Police of a truck that was hijacked. The information was followed up and the truck was located at Delmas Sarel Celliers Street. The suspect was located and arrested whilst walking away from the truck. The truck was loaded with soya. Police are still looking for other suspects.

It is further reported that on 04 February 2022 at about 17h00 the driver of a truck that was loaded with soya with two trailers was cornered after being stopped by two suspects driving in a white VW Golf 7 at Botleng Mall in Delmas. The victim was forced at the back of the truck and his head was covered with an overall. The suspects drove around with him and took him to the bush and left there.

The truck and trailers were later recovered whilst the soya to the value of about R 260 000-00 which was loaded in the truck was stolen by the suspects.

Meanwhile on 04 February 2022 at about 22h56 a lookout was given for a white Toyota double cab GD6 bakkie which was hijacked in Vosman. At 23h22, Highway patrol members from Middelburg spotted the vehicle on the N12 between the R42 and R50 off-ramps towards Johannesburg. The members called for back-up from Delmas members. The vehicle was recovered and one suspect was arrested. Police also recovered a jamming device.