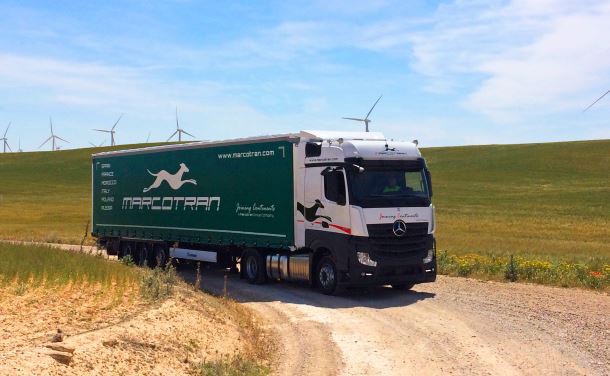 Spanish haulier Marcotran has proved the savings that Goodyear FUELMAX and KMAX truck tyres offer.  Comparative tests run by the company show that on certain routes it can save almost €1,000 per vehicle per year by using FUELMAX tyres, and the high mileage offered by KMAX tyres makes them more economical on other routes.

Marcotran is a Spanish-based international freight company.  Its pan-European fleet comprises about 700 trucks and 1,200 trailers, with routes varying from mundane regional runs to the longest between Spain to Moscow.  The fleet currently runs mainly Goodyear’s low rolling resistance FUELMAX truck tyres.  However, Marcotran was keen to discover the difference that using Goodyear’s mileage-optimized KMAX tyres would make.  The challenge was to compare the savings in fuel with those in tyre costs in terms of mileage.  The results were very revealing and clearly showed both Goodyear ranges help to reduce the Total Cost of Ownership.

Fuel consumption with the FUELMAX tyres was 30.38 liters/100km and 31.58 for the KMAX combination, representing an annual saving in fuel cost of €1,252 with FUELMAX tyres compared to KMAX.   This showed the comparative savings in terms of mileage that the KMAX tyres offered and the fuel savings thanks to the FUELMAX tyres.

Based on internal tests by Marcotran.

Fuel savings based on Marcotrans findings.