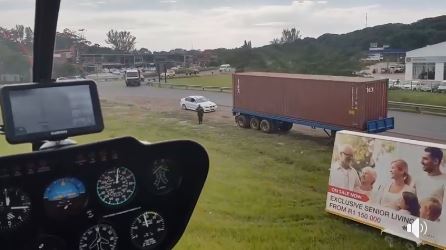 A trailer that was hijacked in Pinetown – KZN on Tuesday this week was recovered abandoned in Salt Rock north of Ballito.

Members of Reaction Unit South Africa received a tip-off that the trailer was parked on the highway near a garage. The RUSA Robinson R44 helicopter lifted off from Verulam and conducted an extensive search of the highway and located the trailer which was loaded with a shipping container abandoned on the southbound onramp to the N2 in Salt Rock.

Reaction Officers on the ground were directed to the location and upon arrival found that the goods from the shipping container had been stolen. The owner of the trailer was traced and upon arrival informed Officers that his truck and trailer was hijacked by an Indian male and two accomplices in Pinetown shortly after leaving the Durban Harbour on Tuesday.

The truck was recovered yesterday and impounded at the SAPS Vehicle Impound in Isipingo. It is believed that the truck was targeted for its load of 240 x 315/80 R22.5 Rhino King truck tyres worth R780 000 which was imported from China.

The hijacked trailer was handed over to Police for further investigation.