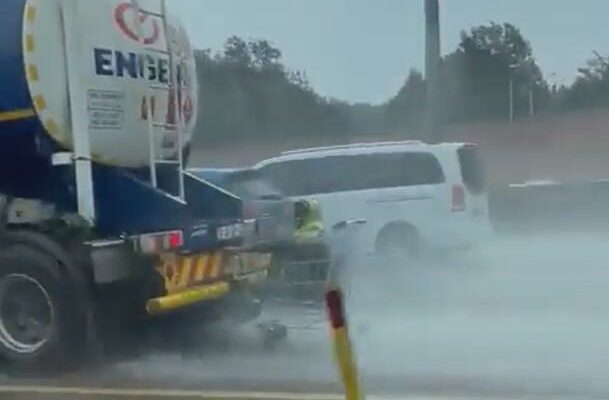 The Gauteng Traffic Police has issued a stern warning to hitchhikers on Gauteng major routes following two videos that were widely circulated on social media depicting a hitchhiker travelling with a grocery trolley attached to a heavy motor vehicle along the N1 South, east of Pretoria. The incident took place on the 03rd of April 2022 during a rainy condition.

Investigations into the alleged hitchhiking incident is currently underway and the hitchhiker will be brought to book soon. The Gauteng Traffic Police has issued a stern warning to the hitchhikers along Gauteng major routes. “The Gauteng Traffic Police would like to warn hitchhikers that such irresponsible behaviour is punishable by law enforcement authorities. The law is very clear, in terms of Regulation 316 (5) read with section 89 (6) of National Road Traffic Act 93 of 1996 stipulates that anyone who constitutes a source of danger to himself or herself thereby endangering other road users commits an offence and may be convicted to a one year direct imprisonment without the option of a fine if convicted in a court of law,” said Sello Maremane , Gauteng Traffic Police Spokesperson.

“Road users are encouraged to make use of public transport as an alternative means rather than endangering their lives and that of other road users,” added Sello Maremane.

The members of the public are urged to alert the law enforcement authorities should they observe such unwarranted conduct by hitchhikers.

Sometimes we have no words!! Stay Alert to the Blind Spots around Trucks!! https://t.co/HNlAQmvTnq #ArriveAlive #SharingRoads #BlindSpots [Video Received] pic.twitter.com/1e58rHCcaa